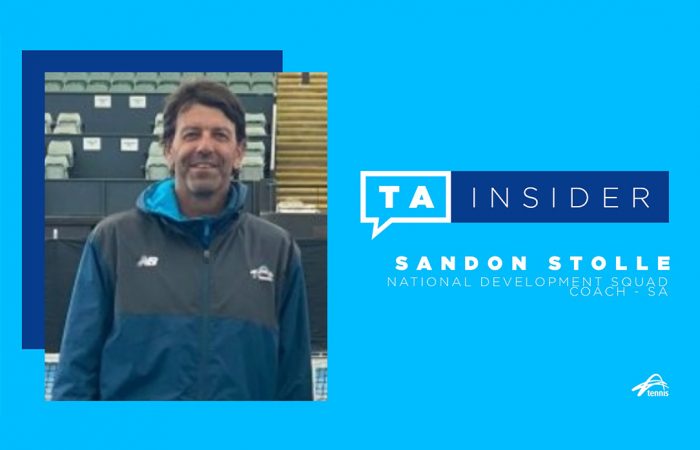 Sandon Stolle scaled amazing heights in his tennis career; now he’s helping the next generation of Australian players strive for their goals. The former world No.2-ranked doubles player reflects on his tennis journey …

My start in tennis was through my family and having a father (Fred Stolle) who was a past champion of the game. I was always involved the sport and very fortunate to be surrounded by other past champions and greats of the game.

After finishing my playing career, I was asked to take a junior Grand Slam trip to Wimbledon with our most promising boys. I loved being back at Wimbledon and passing on my knowledge to the next generation. This inspired me to coach and to keep making an impact to individuals both on and off the court.

A few of my coaching highlights have been taking overseas Australian representative tours at a junior level. I also did 15 months with the Chinese national women’s team ahead of the Beijing Olympics and really enjoyed my time working within a different culture.

Describe your role as a National Development Squad Coach?

What is the biggest challenge in your role?

To keep striving for the “competitive environment” and bringing all the best kids together in the state to train and push one another.

What is the most rewarding part of your role?

Impacting South Australian athletes and watching them achieve their short-term and long-term goals both on and off the court.

What’s a great day at the office look like?

I love our morning squads, as I love the mornings and getting in early. Once the kids wake up, it’s a really good time to make an impact.

What is your coaching philosophy?

Tennis is such a long journey. You need to keep challenging yourself every day at training and work hard with an attitude for success.

Embrace the challenge and give your best effort on the day.

The challenges of what the sport throws at you physically, mentally, tactically and technically. It is a sport for life, which keeps throwing out amazing experiences.

Which professional players did you enjoy watching?

I was fortunate to watch Jimmy Connors, Vitas Gerulaitis, John McEnroe and Bjorn Borg all train with my father. In today’s game, I love the athleticism and shot-making of Gael Monfils. I also enjoyed the now-retired Agnieskza Radwanska in the women’s game, as she had so much variety in her game.

Getting out of 2020 and getting back to some consistency.

> Milo Bradley is ‘living the dream’