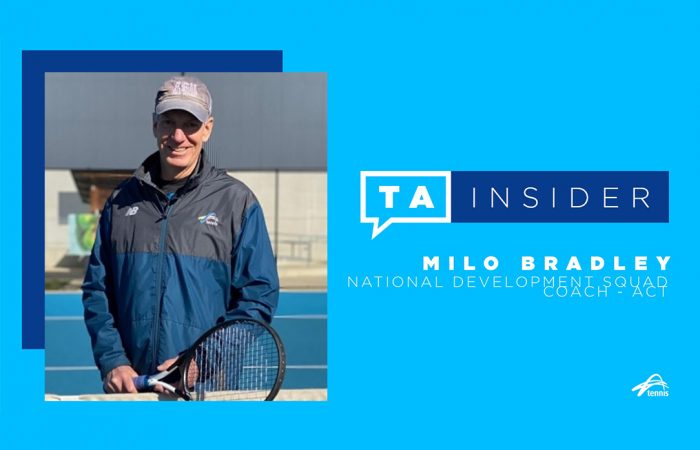 Milo Bradley’s passion for tennis is unquestionable – but that was not always the case. The esteemed coach reflects on a journey that began in the United States and has now taken him all over the world and Australia …

Talk about your own start in the game?

I grew up in Detroit, where my Dad was a factory worker who loved to coach tennis during the summer months. I hit my first tennis balls at seven years old – but I disliked the sport for three reasons. One, it was not a team sport. Two, the skills needed to achieve success were tough to master. Three, a lot of the people who played tennis had money. I preferred ice hockey, which I had been playing since I was five. But as one grows up, suddenly the things you first dislike become more attractive. By age 13, I had a strong desire to show up to tennis tournaments and beat up on ‘rich kids’.

The seed was planted at age 16 when asked by my high school principal to run a summer tennis clinic at the school courts. The earnings were small and interfered with my tournament time, yet it assisted some 100 plus people to play the game that summer. As time progressed in life, there was always someone wanting to learn how to hit a serve, backhand or forehand. Sort of osmosis, suddenly this was my life being financially rewarded to coach at all levels. What was inspiring was seeing the joy at grassroots level with players learning the game, followed by performance players achieving their goals both on and off the court. On reflection, the stimulation to find creative ways for players to learn and improve their skills in a disciplined format evolved.

Every day I get to walk out on the court and assist someone is a highlight. If you grew up in Detroit, you were expected to work on the assembly line in an automobile factory and be a part of a gang. So, each day I get to assist someone is very special – especially to be able to experience this in such a brilliant nation. Australia has provided a wonderful career from grassroots all the way to Grand Slam-level tennis. It pretty much fulfills the term ‘living the dream’. I’ve spent many years travelling up and down the coast of Queensland, along with time in the Northern Territory, then building my own family and a program in Western Australia. I’ve also travelled and coached through every level of the Slams, grew a coaching program in South Australia and now I’m assisting in the ACT. My 38 years in tennis is a long highlight! If I wake up from the dream, I could find myself back in some down-and-out factory in Detroit.

I support Tennis Australia’s Director of Talent Paul Vassallo, as a National Development Squad Coach in the ACT. In short, I lead a holistic performance tennis program for all the ACT and the greater region. I manage the National Development Squad program and connect with private coaches. The objective is to feed potential top-100 players to the National Tennis Academy in Brisbane.

Staying warm in the Canberra winter! I constantly need to find ways during the current environment to keep athletes focused on the bouncing yellow ball and not the distractions that consistently come before us. The role evolves and does have some surprises, that some people forgot to remind me about, but I am excited for any challenge or surprise that come my way.

What is most rewarding part of your role?

This is actually a ‘job’ and I have the opportunity to assist and serve others to potentially achieve their goals. The reward is I am fortunate enough to get to ‘repeat’ it every day. I’m very grateful for the opportunity.

It can be as simple as leading athletes in a two-on-one drill, where six minutes can go by without having to say a word. I could just listen to the ‘bop’ of the ball being hit, as it travels back and forth with intensity from three athletes making little or no errors. The reward comes in seeing the look in the athlete’s eyes when you make them aware of what they achieved.

What is your coaching philosophy?

Essentially, my philosophy is built around the following:
Program philosophy: “Everyone gets a go, provided you have a go …”
On-court philosophy: “30 balls in 60 seconds … dictates intensity.”
Life philosophy: “Happy are those that dream a dream and are willing to pay the price to make that dream come true.”
Philosophy to solutions: “Regardless, at the end of the day, ‘upwards and onwards’ we will find a way.”
Finally, a strong work ethic eliminates fear.

I would leave that one to my players –  I have heard them repeat a few. It’s amazing what they think they hear!

There are so many lessons one learns every day in the sport of tennis. For me at present, regardless what is happening there is always another ball to be hit.

There’s been plenty of advice – one that stands out is: “You never, never know, unless you have a go.”

Tennis provides a lifetime of opportunities at any age. The fact that one gets so many opportunities to hit the ball, and someone smacks it right back, creates a whole array of experiences from one reply to the next challenge. Whether is it chasing a shot across the court and getting to it successfully, or being on the losing end of a hard-fought battle, opportunity exists every time one walks on the court.

There have been plenty of professional players that have come and gone. In the present era, Roger Federer amazes me since it is hard to believe he is as good as he truly really is! Rafael Nadal surprises me he still plays, since his game is so physical. Most people would fall apart. Novak Djokovic also surprises me how much he has improved since his early years, a credit to his work.

The women’s game now demonstrates so many game styles. I’m very excited to watch Ash Barty, she’s certainly a game changer. I could go on all day about the Aussies over the last 15 years. There’s been some amazing achievements, and I have had a lot to do in the programs that developed them. There’s been a lot of hard work gone into these accomplishments.

To inspire ACT players to ‘dream the dream’.