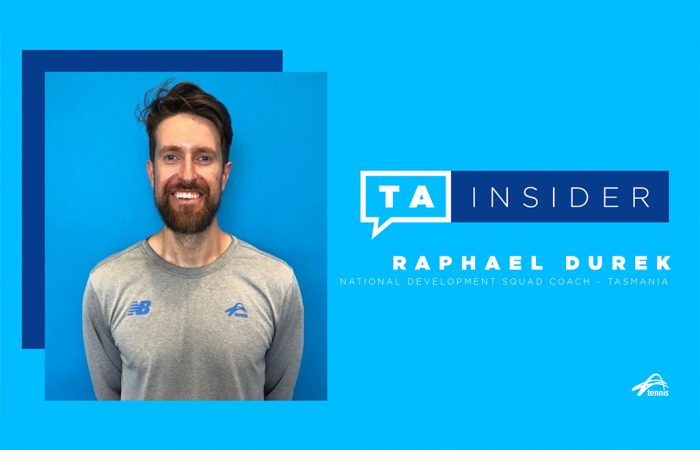 With memories of coaches who instilled a strong work ethic and important values in his own playing career, Raphael Durek is determined to lead by example as National Development Squad Coach in Tasmania.

My older brother played tennis, so I would hang around the tennis courts while he had lessons and trained. Eventually my father would start feeding me balls to hit and at the age of five, Dad asked me whether I would like to start lessons. Within a few years I was competing in junior tournaments, which eventually led to competing nationally and internationally.

When I was finishing up my playing career I still wanted to stay involved in the sport. I felt like I had a lot of knowledge to give and that I could help others on their tennis journeys.

What are some of the highlights of your coaching career?

I have been fortunate to be involved with many organisations, coaching teams and individuals that I hope have benefitted from my coaching, guidance and teamwork.

Prior to my current position I was the Talent Performance Coach for Girls NSW, Head of Tennis at St Catherine’s School in Waverley, a Performance Coach at Meriden School and the Tennis New South Wales State Academy State Coach. Across these roles, I was able to work with multiple national champions and Australian representatives while being a Tennis Australia Talent Development Coach and completing my High Performance coaching qualification.

I am responsible (alongside Trent Constance, the Talent Operations Manager – Tasmania) for the development and implementation of the National Development Squads. We are looking to complement the programs athletes have with their private coaches and hope to bring the best athletes together in an environment where they can work on their games, compete and raise each other’s standards. We also work closely with the private coaching market and work towards the development of player development statewide through a number of working relationships, camps and programs.

What is the biggest challenge in your role?

The smaller population compared to most of the other states and isolation. Understanding what the national and international levels are is critical and this is where we try to educate the athletes to allow them to be competitive and achieve the appropriate levels of development based on their goals.

What is the most rewarding part of your role?

Being able to make a positive impact and helping others get closer to achieving their goals, while creating a positive culture.

Making an impact, helping others and learning a little every day.

Each shot is an opportunity to learn and you only get out what you put in.

If you could name one lesson that’s most important, what would it be?

Don’t be afraid to fail – learn from it and try again.

That’s a tough one, as it was a while ago and I was fortunate to have worked with a number of great coaches. What I can remember was the work ethic they instilled and how they led by example with good values and humility.

It is a fantastic sport, the ability to play with so much variation and all of the components it requires, such as tactics, physicality, endurance and speed. Also that it’s a game for life.

Growing up my favourite players were Andre Agassi and Boris Becker and then Gustavo Kuerten, Marat Safin, James Blake and Fernando Gonzalez. They all played with attacking game styles and were great shot-makers. My favourite players of today are Juan Martin del Potro on the men’s side and Garbine Muguruza on the women’s side for similar reasons. Of course, I love to watch the greats face off and you can’t go past a Roger vs Rafa Grand Slam final!

Hopefully a return to normality. It would be great to return to interstate tournament play for our juniors, especially at the National Championships as that is where they can really test themselves.

Of course, starting the National Development Squads in term four is something that excites us as we develop the program and most of all, I am looking forward to seeing how all the Tasmanian athletes progress throughout the year. It would also be great to compete for our state, as that is always an honour and a privilege.