Meet WA National Development Squad coach, Tom George, who is establishing a foundation of hard work among the next generation of  Australian professionals. 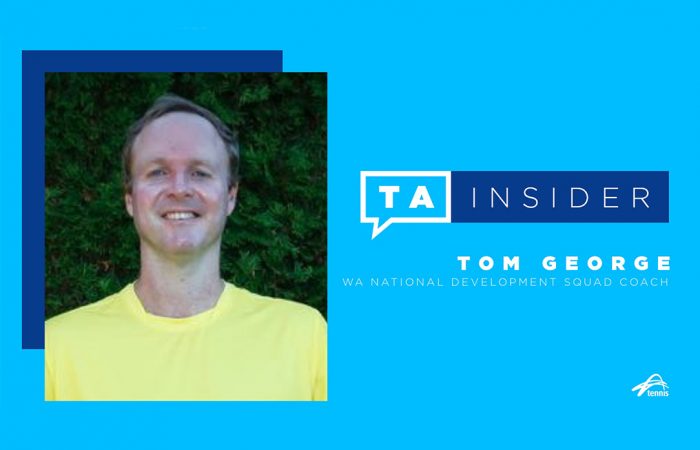 While a love for tennis was instilled early for Tom George, so too was the value of hard work. After a coaching career that’s already seen him guide many of Australia’s top young players, Tom is now combining his passion and work ethic as the WA National Development Squad coach.

As a young kid I would pick up tennis balls for my mum at the local club when we lived in Fiji. The coach would then give me a five-minute hit at the end of my mum’s lesson as a reward. I instantly loved the game and would spend hours hitting on the garage wall at home and begging my parents to take me to the club. Tennis is a huge part of our family life, as we all love the game.

I have always loved the game and have been fortunate to have had great coaches myself. Helping young, aspiring professionals fulfil their potential and achieve their goals is incredibly satisfying.

(Being) Team Captain at the boys World Junior Teams in 2018 was a huge honour. The boys qualified through the Asian qualifying in Thailand and we finished in the top eight at the World Championships in Prostejov, Czech Republic.

When I took the 14/u Australian boys’ team on the European tour they won the Duno Air Fair Play Award at the Category 1 Windmill Cup in Oosterbeek, The Netherlands, acknowledging outstanding sportsmanship on and off court. The team and I were most proud of this award.

Being the coach/manager of the 14/u WA Girls Team that won back-to-back national titles at the Australian Teams Championships in Melbourne and the Gold Coast was another high point.

Working with Australia’s top juniors and professionals is also a real highlight each and every day. Working with players such as Matthew Ebden is a real buzz.

The role is responsible for delivering a holistic High Performance Tennis Program in WA. I am working hard to positively impact athlete and coach development through communication, education, integration and support. The position is responsible for the selection and development of players aged eight to 18 through the implementation and management of Zone and National Development Squad programs.

To consistently ensure great depth year after year. WA has some of the best players in the country and we need to ensure those players keep pushing each other. The base also needs to be strong to ensure that tournaments and leagues in WA have good depth and that the next generation pushes the older age groups.

What is the most rewarding part of your role ?

Seeing WA players thrive nationally and internationally. Seeing the hard work pay off and seeing the athletes reach their goals.

We have a vibrant, hardworking team in WA, so a great day at the office is seeing everyone happy and working hard. Seeing all the courts full, with lots of energy, noise and great atmosphere brings a smile to our face each day.

My coaching philosophy is based on the foundation of hard work. Outworking the competition and combining some fun along the way. Providing an environment that allows the athlete to maximise their potential.

It is also to evaluate the unique strengths and weaknesses of each athlete and build a game plan around that individual. Looking at physical attributes, their movement, technique, game style and then construct a plan. First and foremost, the athlete needs to be technically sound.

My coaching philosophy is to build a game around a player’s weapons. It is important to have a complete game with a focus on an aggressive brand of tennis, building an athlete who is physically and mentally strong and ready for the tour. Building a strong physical base both on and off court, allows the athlete to play this physically demanding brand of tennis day in, day out.

What’s your most-used phrase when coaching?

Work hard and have fun.

Never give up, give 100 per cent effort and chase your dreams. Anything is possible.

Train so hard that playing a tournament is your rest period.

The relationships formed through tennis stretch right around the world and you are friends for life.

Lleyton Hewitt. A player that always gave his best effort and wore his heart on his sleeve. I have a great amount of respect for what Lleyton has done for Australian tennis and the example he set for young Australian players to chase every ball and to outwork the competition. A true legend of the game.

We have a number of metro and regional camps planned in WA. It is always exciting to see the next wave of talent coming through. I am also looking forward to working closely with Paul Vassallo and the rest of the Talent team on some great new initiatives and ensuring our young Aussies have a world-class pathway to maximise their ability.

“What excites me the most is the end goal … more kids playing the sport at a competitive level and having a greater depth.”