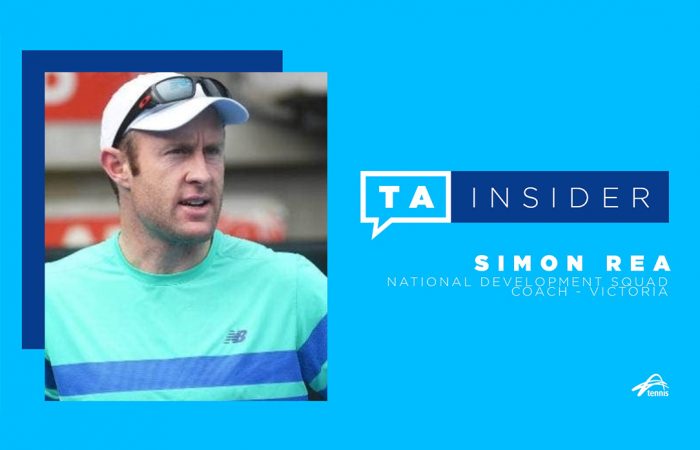 Simon Rea describes tennis as the “ultimate test of our resilience”. The esteemed coach, who has previously worked with Nick Kyrgios and Sam Stosur, is now Tennis Australia’s National Development Squad Coach in Victoria. Rea is embracing the new role with his signature passion and determination to help the next generation achieve their best on court.

I really fell into tennis by chance. I had an incredibly fortuitous encounter with a volunteer coach, who was responsible for introducing me to a sport that has become incredibly precious to me. On the North Shore of Auckland, Dad would walk the dog alongside the lake (which bordered the local tennis club). One morning in particular (I think Mum and Dad thought cricket was taking up too many Saturday hours) we happened to take a racquet and use some of the balls the dog had found against the brick wall at the club. That was when Joseph O’Rourke gave me a wave and asked me to hit a few balls with him. I would have been eight at the time and had never played. Joe and I went on to hit balls together nearly every morning before school for the next three or four years. He was a remarkable gentleman who I am so very indebted to.

I’d always been passionate about all kinds of sport and had a real curiosity around great coaches from various sports and the different philosophies they seemed to employ. I suppose during my very mediocre playing days, I had an eye on what really resonated with me when dealing with coaches and began to make some mental notes around what I really liked or what I might change if the shoes was ever on the other foot. I suppose in reflecting on the influence that Joe has had on my life, the seeds of the power of coaching were sown early with me and I’ve been so incredibly fortunate to have been able to forge a career through the sport.

I think the most enjoyable aspect of my role has been the enormous trust, openness and vulnerability that people have been willing to place in me over the journey. I’ve learned so much through those interactions with numerous athletes, families and staff along the way. I can vividly recall a letter that was delivered to me by the family of an athlete that was departing for US college. It spoke to the impact that the family felt I’d had on the growth and development of their son, both on and off the court. That remains a really special moment to me. I’ve also had the privilege of working with some phenomenal athletes that have achieved some really special things in the sport. I learned a huge amount through my 18 months working closely with Nick Kyrgios, which culminated in that amazing run he made at Wimbledon in 2014.

Under Paul Vassallo’s leadership, the NDS team are working hard to formulate the relationships with the various stakeholders that will, hopefully, allow us every chance to further accelerate the next wave of young talent in Australian tennis. With the strategic direction shifting to provide an incredibly exciting opportunity for the private coaches throughout Australia, our job in the NDS environments will be to support those coaches to the fullest extent possible. Within this, we’ll be very fortunate to potentially work with the leading talent from both a playing and coaching perspective throughout Victoria and to help transition that talent to the newly-formed National Tennis Academy in Brisbane at the earliest possible opportunity.

Given the program is very much in its infancy, it’s hard to say in some ways. I’d say at times I need to balance what the athlete/group is ready to absorb/action, with my urgency, intensity and passion to make a difference for Australian tennis. I think those things are strengths of mine as a coach, but can also be to my detriment at times.

What is most rewarding part of your role?

I think the core component of what I find so rewarding in coaching is the relationship piece, and the holistic growth and development that can occur through conducive environments in this regard. That doesn’t necessarily have to correlate to high performance outcomes immediately. For me, when the breakthroughs occur in terms of understanding and buy-in, that is a moment worth celebrating in and of itself.

What does a great day at work look like for you?

To strike just the right balance between safety, challenge, support and rigour – and we’ve been able to have a few laughs along the way.

How would your describe your coaching philosophy?

Before an athlete cares what you know, they most probably want to know how much you care.

This would be a toss up between “this is a high performance environment”, or emphasising the purpose of the session marrying up with where the individual wants to go in terms of their aspirations.

TA’s Head of Performance Coach Development, Scott Draper, has been someone that’s had a really significant influence on my professional development. Scotty’s emphasis on the program (daily sessions) reflecting priorities (more global or overarching developmental considerations) has been a gem that’s really stuck with me and served me well in working with athletes and coaches.

I don’t know if I’d quote a single piece of advice, but the environment that past New Zealand great Chris Lewis created in terms of work ethic, standards, physicality and pure day-in, day-out intensity was something to behold. Chris has such an incredible ability to lead by example, keep things simple, engender buy-in with a minimum of fuss and refuse to compromise on what was most important to him as a coach on a daily basis.

I think in some ways it’s the ultimate test of our resilience, vulnerability and courage. It’s a grueling test and yet it’s worth all of that, in terms of what the sport can teach us.

Ash Barty for her mesmerising ability to navigate her way through all kinds of challenges with subtlety and an incredible sense of gratitude that permeates her entire tennis persona. Rafael Nadal is the greatest competitor I’ve ever seen. Love his humility and the way he approaches his tennis from a values standpoint and with terrific perspective.

I think the challenge of weaving all of this together to play a small part in the forming of a high-performing team and program that is very much in its infancy. A blank canvas in some ways and I’m really grateful to be in a position to attack the opportunity that awaits with the vigour and urgency that’s required from all of us to play our part in Aussie tennis achieving more elite performances in the years ahead.