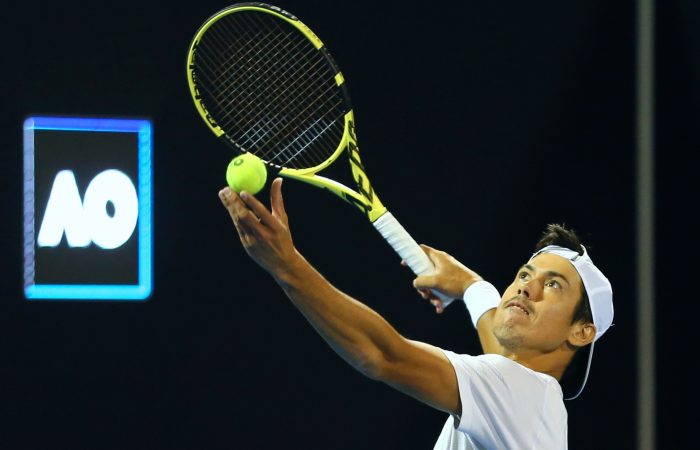 [WC] Rinky Hijikata (AUS) v [11] Cedrik-Marcel Stebe (GER)
Doha, Court A, first match (starts 6.30pm AEDT)
Through to the second round of Australian Open qualifying for a second year in a row, 19-year-old Hijikata’s confidence is also growing. “I think I’m a completely different player to a year ago. I feel like there’s a lot of things that I’ve worked on,” the world No.685-ranked wildcard said after dismissing American Christopher Eubanks in straight sets in the opening round. “I feel like I’m a little bit fitter, a little bit stronger, and it’s helped me a lot out on the court.” Hijikata faces world No.125 Cedrik-Marcel Stebe in the second round, a 30-year-old who has been ranked as high as No.71. Ahead of his first career meeting with the 11th seed, Hijikata knows he needs to focus on the match rather than his chances of a potential Grand Slam main draw debut. “It would be a dream come true (to qualify),” he said. “But I’m not even thinking about that yet.”

[WC] Jason Kubler (AUS) v Sergiy Stakhovsky (UKR)
Doha, Court 6, second match
After defeating fellow Australian Matthew Ebden in the opening round to record his first ever Australian Open match win, Kubler is determined to continue his winning run. The world No.259’s next opponent is a Sergiy Stakhovsky, a 31-year-old who memorably beat Roger Federer at Wimbledon in 2013. Stakhovsky is currently ranked No.201, but has climbed as high as No.31. This is their first career meeting. After dealing with wrist and elbow injuries over the past two years, the 27-year-old from Queensland is looking to rebuild his ranking – which peaked at No.91 in 2018. Kubler has added incentive as he attempts to qualify for Australian Open 2021. “I’m trying to chase my girlfriend (fellow Australian player Maddison Inglis),” Kubler said. “She’s in main draw now, so I’ve got to try catch up to her. She can’t be making all the money.”

Andrew Harris (AUS) v [2] Hugo Dellien (BOL)
Doha, Court A, third match
Hugo Dellien may be the tournament’s second seed, but Harris believes he can challenge the world No.111 when they meet in the second round. “Obviously it’s a big tournament and I want to do well,” said No.232-ranked Harris. “I’ve done a lot of training before this and I was feeling good, so I have some expectations on myself to try and do well here.” Self-belief is important notes Harris, claiming it is the biggest lesson he has learnt since 2015 – when he last advanced to the second round of AO qualifying. “Back then I was playing with a nothing-to-lose attitude,” he said. “I was young and playing all these guys who were ranked a lot higher than me, but now I’ve been around this level a lot longer. Now my expectation is to do better and qualify here. I’ve just got to stay level-headed and take it one match at a time, really compete and just leave it all out there on the court.” This is the 26-year-old Harris’ first meeting with Dellien.

Bernard Tomic (AUS) v [WC] Tristan Schoolkate (AUS)
Doha, Court B, third match
After scoring his first Grand Slam-level win yesterday, Schoolkate’s confidence is brimming as he enters this all-Australian showdown with former world No.17-ranked Tomic. “It doesn’t phase me who I’m playing, I’ll just try to play my game and go out there swinging,” said the 19-year-old wildcard, who is ranked No.839. Tomic is experienced enough to know this could mean trouble. “He’s going to take it to me, he’s got nothing to lose. For me, it’s going to be a little bit tougher,” said the world No.235-ranked Tomic, noting he will be playing with all the pressure. After a difficult opening-round win against No.14 seed Jozef Kovalik, Tomic emphasised the importance of maintaining focus. “It’s about concentration and doing the right things, keeping your head straight,” he said of his biggest on-court challenges right now. Although Schoolkate and Tomic both took part in recent UTR Pro Tennis Series events in Brisbane, they have never previously played.

John-Patrick Smith (AUS) v Tallon Griekspoor (NED)
Doha, Court 1, fourth match
The experienced Smith enters a second-round showdown with the Netherlands’ Tallon Griekspoor knowing that nothing can be taken for granted in Grand Slam tennis. “It’s going to be a tough one, there’s a lot of good players here,” the world No.315-ranked wildcard said. This is Smith’s first meeting with the 24-year-old Griekspoor, who achieved a career-high ranking of No.138 last September. Smith did not compete on tour after March last year, instead coaching in his home town of Townsville and competing in the domestic UTR Pro Tennis Series. “It was a little different,” Smith said of his AO preparations. But with an upset of No.25-seeded Paolo Lorenzi in the opening round, Smith proved he is still a qualifying contender. “It would just be a really fulfilling way to come back to Australia,” the 31-year-old Smith said of what earning a place in the AO main draw would mean to him.

Max Purcell (AUS) v [3] Aslan Karatsev (RUS)
Doha, Court 1, fifth match
In a rematch of a Roland Garros second round qualifying match from last year, Purcell is determined to reverse the result. “He was on a bit of a roll then, so it’s nice he’s had a bit of a break and a little bit of a confidence holt,” the 22-year-old from Sydney said of the No.112-ranked Karatsev. “Hopefully I can get a win on courts that are slightly more favourable to me. The best I can do is just leave it all out there.” Purcell, who is seeking to qualify for the Australian Open for a second consecutive year, also has added motivation after his coach Nathan Healey was unable to travel to Doha due to a wrist burn. The pair have been working hard on Purcell’s singles game in recent weeks. “He wasn’t allowed to come, so that shattered me a little bit,” the world No.238-ranked Purcell said. “But he has a lot of belief in me to qualify and I’m trying to do that.”

Note: Australian Dane Sweeny, a 19-year-old wildcard from Queensland, has advanced directly through to the third round following the withdrawal of his second-round opponent (fourth-seeded American Denis Kudla).

Ellen Perez (AUS) v Varvara Lepchenko (USA)
Dubai, Court 3, second match
A considered effort not to put too much pressure on herself is already paying dividends for Perez, who has matched her career-best AO result this week. The 25-year-old now faces world No.181 and fellow left-hander Varvara Lepchenko for a place in the final qualifying round. This is Perez’s first meeting with the 34-year-old American, who is a former world No.19. “I don’t want to look too far ahead,” said the No.235-ranked Perez. “I think in the past I’ve always set goals that are maybe not unattainable, but (I) put a lot of pressure on myself. And I think it’s better for me to just kind of take it day by day, and work really hard on the little things, and eventually they’ll pay off.” As Perez attempts to qualify for a major for the first time, she is buoyed by support from her peers on site. “The Aussies have a great camaraderie, we really help each other out. I really felt the energy,” she said after her first-round win.

[WC] Oliva Gadecki (AUS) v Whitney Osuigwe (USA)
Dubai, Court 1, fifth match
This looms as a captivating battle between two 18-year-old players, albeit with very different levels of experience. Gadecki, an unranked wildcard, is contesting her first Grand Slam – and first professional event overseas. Yet she showed remarkable poise in her opening-round victory, one she admits left her “so overwhelmed, that I didn’t even know how I was feeling.” Her next opponent is a former world No.1-ranked junior who is making her ninth appearance in a Grand Slam draw. However, Gadecki has vowed she is not intimidated by world No.161 Osuigwe’s clear edge in experience. “I’m so grateful for the opportunity,” she said. “I’m just going to go out there and just compete to the very end. And just believe in myself, believe in my game, and go after it. I’ve got nothing to lose.”