Australian players shine on day two of Australian Open 2021 qualifying, with seven advancing to the second round. 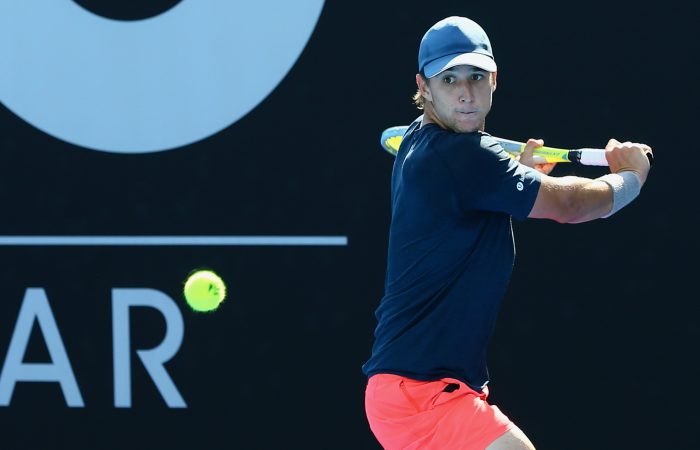 It has been an exceptional day two for Aussie players in Australian Open 2021 qualifying, with Bernard Tomic, Tristan Schoolkate, Andrew Harris, John-Patrick Smith, Max Purcell and Dane Sweeny all advancing to the second round in men’s singles action in Doha.

In Dubai, Queensland teen Olivia Gadecki recorded a stunning major breakthrough to move into the second round of the women’s singles qualifying draw.

Bernard Tomic made a winning start to his AO 2021 qualifying campaign, eliminating No.14-seeded Slovakian Jozef Kovalik in the first round.

“I was lucky I regained my focus for that third set, because it was go in or go home,” Tomic said.

The 28-year-old has his sights set on making an 11th Australian Open main draw appearance.

“Of course it would be unbelievable,” Tomic said. “I’d love to qualify here and play the Australian Open, I’ve played so well there in the past 10 years. It’s an unbelievable tournament for me, I hope I get my chance.”

Yet Tomic is keeping his expectations measured.

“I haven’t played much tennis, I only started practising a couple of months ago so there’s not much to expect,” he said. “I’ll try my best.”

Tristan Schoolkate might be the lowest-ranked player in the men’s singles qualifying draw – but the 19-year-old wildcard is proving he can compete with the world’s best.

The world No.839-ranked Schoolkate recorded an impressive 7-6(1) 6-4 win against Argentine Guido Andreozzi in the opening round. It is the Western Australian’s first Grand Slam-level victory.

“I am the lowest-ranked guy here, so for me it was just go out there and get swinging,” said Schoolkate after defeating the world No.166-ranked Andreozzi.

“I’m really happy to be through … It would be absolutely unreal (to qualify). I’m one step closer.”

His next opponent is Tomic, an all-Australian clash that guarantees at least one Aussie man will advance to the final qualifying round.

“It was pretty tough conditions so I don’t think I played amazing, but I just competed really hard,” said the No.232-ranked Harris.

“I just battled every point. It got pretty physical, so I’m really happy to come away with the win.”

Losing a tight second set tested Harris’ resolve, but he stepped up to close out victory after two hours and 30 minutes on court.

“I changed my tactics and started going after it a bit more, being more aggressive and conserving some energy. I felt that made me play better too,” Harris said of how he approached the deciding set.

“I just took it one service game at a time and got there in the end.”

Making his eighth appearance in an Australian Open qualifying draw, John-Patrick Smith is no stranger to the pressures that accompany trying to qualify for a Grand Slam.

The 31-year-old from Townsville still faced a more experienced player in the opening round – No.25-seeded Paolo Lorenzi, a 39-year-old Italian ranked No.145.

“It was really tricky conditions. Windy, shadows, playing next to another court – so there was a lot of of distractions.

“I was pleased to get through. It was a tough first set where I battled, (but) after that I played really well.”

The No.315-ranked Smith, a wildcard entry, has twice made the final round of AO qualifying but is looking to qualify for a first time.

“It would be huge,” he said of the prospect of securing a place in the AO 2021 main draw.

Taking to the court late on day two, 22-year-old Max Purcell was buoyed by the success of his fellow Australians.

“It’s always good to get as many Aussies as we can through,” the world No.238 said.

“There was some really good patches and some really average patches, but I mean since March last year I haven’t played too many singles matches. It’s mostly been just doubles,” said Purcell, who is ranked No.38 in doubles.

“After doing a bit of a training block on singles and focusing on that, getting a win against a good player is always nice.”

The 19-year-old from Queensland could not hide his joy after scoring the biggest win of his career.

“Competing well was my goal today and I thought I did that, so I’m happy with myself,” Sweeny said.

“I was just thrilled to be out there playing my first Grand Slam, and for it to be the Australian Open just makes it 10 times better.”

Sweeney, a No.794-ranked wildcard, is now determined to continue his winning run.

“I’m really happy with how I’ve done, but it doesn’t mean I’m here to lose second round,” he said. “I’m going to try to qualify and go deep in this tournament.”

Olivia Gadecki – who is also Schoolkate and Sweeny’s housemate – enjoyed a dream Grand Slam debut too.

The unranked 18-year-old wildcard scored the biggest win of her young career, defeating world No.246 Lara Selden of Belgium 2-6 7-5 6-3 in the opening round in Dubai.

“All I could do, to be honest, was go out there, and compete, and try my very best. And just believe in myself. Believe that I’ve done the work, my level’s there. And I just wanted to have fun,” Gadecki said.

Gadecki was the sole Australian woman to advance on day two.