In an incredible day of results on Monday, Australian teenagers Olivia Gadecki, Dane Sweeny and Tristan Schoolkate all notched their first Grand Slam qualifying wins. And they all live together. 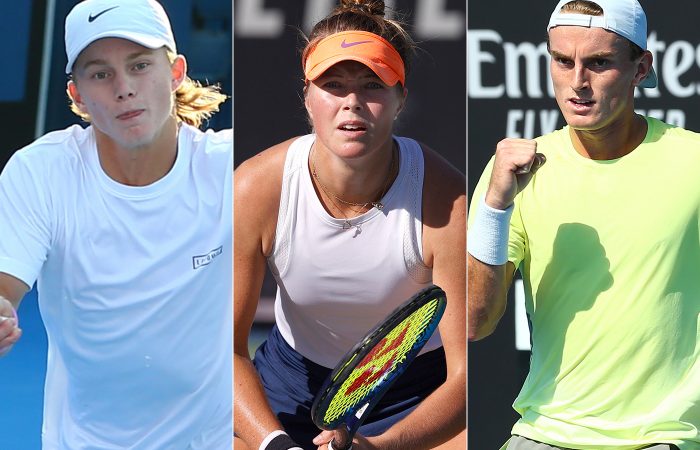 Among the Australian winners on day two of Australian Open 2021 qualifying were three teenagers who share a house together in Brisbane.

Olivia Gadecki, Dane Sweeny and Tristan Schoolkate all notched their first ever Grand Slam qualifying victories to progress to the second round in the Middle East.

“We probably started living together about five months ago,” Sweeny explained. “It’s a good environment, we’re all tennis players who are really passionate and just love what we do.”

The first of the housemates – all wildcards in the qualifying tournament – to advance was Schoolkate, who beat world No.166 Guido Andreozzi 7-6(1) 6-4 with a brand of traditional, attacking, all-court tennis.

The 19-year-old, who recently relocated to Brisbane from Perth, had at least had a taste of Grand Slam tennis, having appeared in the qualifying draw at AO 2020.

Yet Gadecki, the next to win through, had never played a professional match outside of Australia and does not even currently have a WTA ranking.

The 18-year-old recovered to upstage Belgium’s Lara Salden 2-6 7-5 6-3 in her first ever appearance in Grand Slam qualifying.

Like Gadecki, Sweeny has never competed professionally outside of Australia and was making his Grand Slam qualifying debut.

“To be honest, I don’t even know where to start (to describe) how I’m feeling right now. At the end of the match I felt so overwhelmed that I didn’t even know how I was feeling,” Gadecki told tennis.com.au.

“I’m so happy that I got through that. I was just trying to stay calm and I was telling myself: ‘oh yeah, I’m fine, like, I’m calm’. But once I stepped to that line (to serve for the match) I was like ‘oh my God, I am freaking out’.

“But I just really tried to stay calm by breathing, and just focusing on what I needed to do that point.”

Her nerves were understandable, given her complete lack of experience at this level.

Having never been ranked higher than No.988, Gadecki has played some ITF junior events in early 2020, but no professional-level matches since an Australian Pro Tour event in Brisbane in September 2019.

During the sport’s COVID-19 shutdown last year, she benefitted from the ability to play several UTR Pro Tennis Series events in Brisbane.

She believed this helped when it facing world No.246 Salden on Monday, a player who won an ITF title in Portugal just two months ago.

“I was able to get a lot of match play, playing girls that were like 200, 150 in the world, like Lizette Cabrera and Maddy Inglis, which prepared me for Dubai, pretty much, with that level,” said Gadecki, who next faces American Whitney Osuigwe.

“All I could do (today) was go out there, and compete, and try my very best. And just believe in myself. Believe that I’ve done the work, my level’s there. And I just wanted to have fun.

“I just need to play more, train more, and just keep doing my best, and I’ll get there.”

Sweeny echoed Gadecki in saying that he was grateful for the opportunity to contest qualifying, and that he went into his match against Copil with the primary goal of simply competing well.

“I’m stoked, so stoked. I thought I could have played a lot better, but I’m just extremely happy to have got the job done in the end. It’s a big relief in my first Slam,” the world No.794 told tennis.com.au.

“I was trying not to put too much pressure on myself. I thought I handled the pressure well. I was just thrilled to be out there playing my first Grand Slam, and for it to be the Australian Open just makes it 10 times better.

“Obviously nerves were coming in towards the end, but I handled them well and put them in the back of my head and just focused on what I had to do.”

Sweeny said he was thrilled for his housemates and other young Australians currently competing in the Middle East including Rinky Hijikata, who won his first-round match a day earlier in Doha.

“Tristan is one of my best mates, so I was so happy for him. He’s been training hard with me in Brissy. Rinky (won) as well. I’m just stoked that the Aussie teenagers have done Australia proud,” Sweeny said.

“(So far) I’m really happy with how I’ve done, but it doesn’t mean I’m here to lose second round. I’m going to try and qualify and go deep in this tournament.