Find out more about the 12 Australian men who are contesting Australian Open 2021 qualifying in Doha this week. 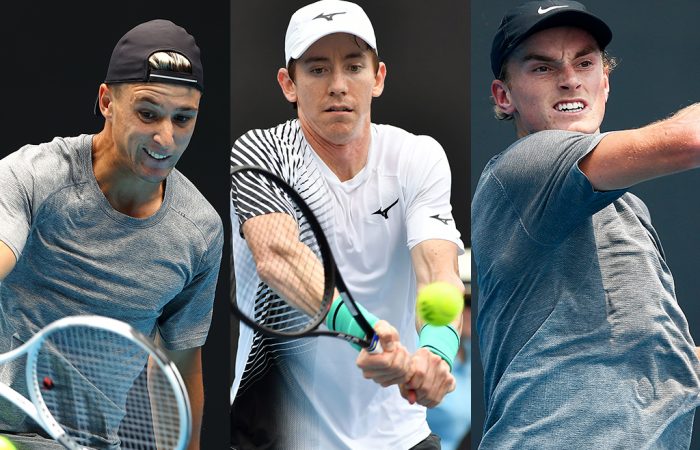 From former top-ranked players looking to return to the top of the game, to rising talents contesting their first Grand Slam. Australia has a strong field of contenders in the Australian Open 2021 men’s singles qualifying field.

Bernard Tomic, 28, Queensland
Currently ranked No.228, Tomic is looking to recapture the form that helped him achieve a career-high ranking of No.17 in 2016. Tomic has previously enjoyed great success at the Australian Open. He won the boys’ singles title as a 15-year-old in 2008 and has advanced to the fourth round in the men’s singles draw on three occasions (most recently in 2016). This is Tomic’s fourth appearance in AO qualifying and he is hoping to qualify for a first time. The 196-centimetre Tomic last played a tour-level match in March 2020, although he did build a 7-1 win-loss record across recent UTR Pro Tennis Series events in Brisbane. He faces the No.14th seed in the opening round, an opponent he defeated in a Davis Cup tie in 2016.
First-round opponent: World No.131 Jozef Kovalik (SVK)
Head-to-head record: Tomic leads 1-0

Andrew Harris, 26, Victoria
Harris was an outstanding junior, winning the Roland Garros and Wimbledon boys’ doubles titles with Nick Kyrgios in 2012. After graduating from the University of Oklahoma with a business marketing degree in 2017, Harris turned his focus to professional tennis and quickly climbed the rankings. He rose to a career-high of No.159 in November 2019 and was rewarded with an AO 2020 main draw wildcard. Currently ranked No.232, this is Harris’ first Australian Open qualifying appearance since he was 20. Harris, whose mother Anne Minter is a former professional player, is seeking to qualify for a Grand Slam tournament for a first time.
First-round opponent: World No.225 Ruben Bemelmans (BEL)
Head-to-head record: Bemelmans leads 1-0

Max Purcell, 22, New South Wales
An impressive Australian Open 2020 qualifying run kick-started a breakout year for Purcell, who beat three higher-ranked opponents to earn his Grand Slam main draw debut. His rising confidence showed on the doubles court, sensationally reaching the AO final as a wildcard alongside fellow Aussie Luke Saville. That performance thrust Purcell into the world’s top 50 in doubles and he finished the season at a career-high No.38. With limited competition opportunities in 2020 due to the COVID-19 pandemic, Purcell primarily focused on doubles. In 2021, he is determined to improve his singles ranking of No.238. This is his fifth consecutive AO qualifying appearance.
First-round opponent: World No.161 Hugo Gaston (FRA)
Head-to-head record: First meeting

Blake Mott, 24, New South Wales
After returning to the sport in September 2019 following a two-year break, Mott won back-to-back Australian Pro Tour titles. The COVID-19 pandemic restricted Mott’s 2020 schedule to five tournaments – but his passion and determination in his comeback has not waned. The 24-year-old, who has entered with a protected ranking of No.253, is currently ranked No.478. He proved he is playing at a higher level, scoring top-150 wins against Australia’s Marc Polmans and Portugal’s Pedro Sousa in 2020. This is Mott’s fifth Australian Open qualifying appearance and he’s hoping to qualify for a second time – having previously done so in 2017.
First-round opponent: World No.204 Elias Ymer (SWE)
Head-to-head record: First meeting

Jason Kubler, 27, Queensland
A former world No.1-ranked junior, Kubler has endured a horror run with injuries in his career. He made his AO debut in 2010. However to protect a chronic knee complaint, he played exclusively on clay between 2012 and 2015. After returning to hard courts, Kubler rose to a career-high of No.91 in October 2018. A wrist injury then sidelined him in 2019. The world No.259-ranked Kubler, who won two UTR Pro Tennis Series titles in Brisbane last year, is hoping his fortunes have changed in 2021. This is his second Australian Open qualifying appearance. He has qualified at a Grand Slam once before, at Wimbledon in 2018.
First-round opponent: World No.317 Matthew Ebden (AUS)
Head-to-head record: Kubler leads 1-0

Akira Santillan, 23, Queensland
Eyeing a first Grand Slam main draw appearance, Santillan is contesting Australian Open qualifying for a fifth time. Although the world No.282 is a wildcard entry, he is a proven threat at Grand Slam level – having won qualifying matches at all four Grand Slam tournaments. Santillan, who has a South African father and Japanese mother, grew up on the Gold Coast. He boasts a career-high ranking of No.144 and lists the Australian Open as his favourite tournament. Like many of his peers, Santillan competed in the UTR Pro Tennis Series in Australia rather than travel internationally last year after March.
First-round opponent: World No.147 Marc-Andrea Huesler (SUI)
Head-to-head record: Huesler leads 1-0

John-Patrick Smith, 31, Queensland
The winner of the AO Wildcard Play-off in December 2019, Smith also progressed to the AO 2020 mixed doubles semifinals alongside Astra Sharma. However, the tour suspension soon curbed Smith’s impressive momentum. He returned home to Townsville, where he took on head coaching responsibilities when long-time mentor Wayne Hannah passed away mid-year. While supporting his local community, Smith also competed in the UTR Pro Tennis Series in Brisbane. The No.314-ranked Smith, who has a career-high of No.108, is attempting to qualify at a Grand Slam for a fifth time – a feat he has previously achieved twice each at Wimbledon and the US Open.
First-round opponent: World No.145 Paolo Lorenzi (ITA)
Head-to-head record: First meeting

Matthew Ebden, 33, Western Australia
Ebden’s quest to contest a ninth AO main draw begins in qualifying this year. He has qualified for the tournament once before, in 2010. The former world No.39, who achieved that high in 2018, is currently ranked No.317 and making his first tour-level appearance since February. Ebden, who won the AO 2013 mixed doubles title, opted to stay in Perth when the tour resumed from last year’s COVID-19 shutdown. He is an experienced player with a 5-1 win-loss record representing Australia in Davis Cup and boasts three career top-10 wins, most recently against Dominic Thiem in October 2018. Ebden faces a fellow Aussie in the opening round – the first time this has happened in 15 AO appearances.
First-round opponent: World No.259 Jason Kubler (AUS)
Head-to-head record: Kubler leads 1-0

Harry Bourchier, 24, Tasmania
Bourchier won four ITF titles in a breakout 2019 season and then started 2020 strongly too, scoring two top-150 wins to reach the third round at an ATP Challenger in Bendigo last January. Although he has not competed internationally since March due to the COVID-19 pandemic, Bourchier did record 13 wins and claim a title during the domestic UTR Pro Tennis Series. The world No.323-ranked Tasmanian, who set a career-high of No.279 in early 2020, is making his fourth appearance in an Australian Open qualifying draw. Determined to recapture his career-best form, Bourchier is also seeking a first Grand Slam-level win.
First-round opponent: World No.155 Tallon Griekspoor (NED)
Head-to-head record: First meeting

Rinky Hijikata, 19, New South Wales
A career-best win against Switzerland’s world No.102 Henri Laaksonen in the opening round of Australian Open 2020 qualifying was a season highlight for Hijikata, who had planned to spend the year abroad studying and playing tennis at the University of North Carolina. Instead he spent most of 2020 in Sydney, where he won a series-leading five UTR Pro Tennis titles. The world No.685-ranked Hijikata, who was named the Male Junior Athlete of the Year at the 2019 Australian Tennis Awards, is competing in Australian Open qualifying for a third consecutive year.
First-round opponent: World No.235 Christopher Eubanks (USA)
Head-to-head record: First meeting

Dane Sweeny, 19, Queensland
Making his Grand Slam-level debut, Sweeny was rewarded with an AO 2021 qualifying wildcard after winning two titles and 24 matches during last year’s UTR Pro Tennis Series. The 19-year-old, who lists Lleyton Hewitt as his idol, was a finalist in the 18 and under Australian Championships in 2019. Although his transition to the professional tour in 2020 was interrupted, he still showed promising signs. Sweeny defeated two top 300-ranked opponents to reach the third round at an ATP Challenger event in Launceston in February. He is currently ranked No.794.
First-round opponent: World No.216 Marius Copil (ROU)
Head-to-head record: First meeting

Tristan Schoolkate, 19, Western Australia
At world No.839, Schoolkate is the lowest-ranked man in the AO 2021 qualifying draw. But he’s a promising talent who can mix it with the world’s best, as he demonstrated when pushing world No.143 Juan Pablo Varillas to a deciding set in last year’s AO qualifying event. Schoolkate earned his Grand Slam-level debut after winning the 18 and under Australian Championships in 2019. His 2020 highlights included serving as an orange boy for Australia’s Davis Cup qualifying tie against Brazil in March, where he spent a week training alongside the Aussie team. He also won two UTR Pro Tennis Series titles in 2020.
First-round opponent: World No.166 Guido Andreozzi (ARG)
Head-to-head record: First meeting