Four Australians are in action on day four of the Roland Garros qualifying competition in Paris. 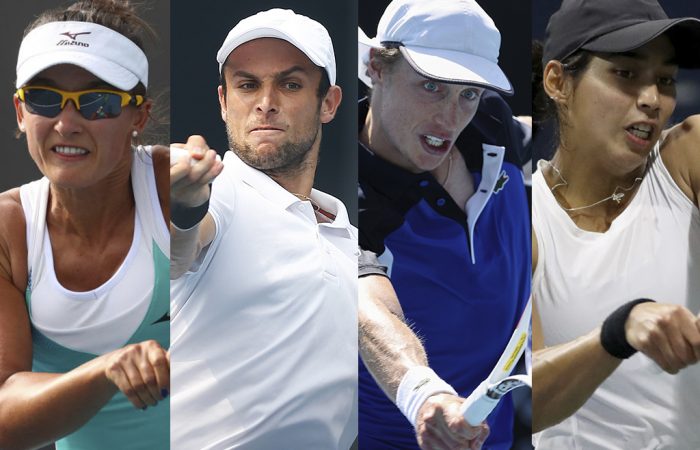 The dream of qualifying for Roland Garros is still alive for four Australian players.

Marc Polmans and Aleksandar Vukic are through to the final round in the men’s singles draw, marking the first time in six years that two Australian men have reached this stage in Paris.

Both are enjoying career-best Roland Garros runs and aiming to qualify for a Grand Slam tournament for the first times in their careers.

Although Astra Sharma and Arina Rodionova have both qualified for major tournaments before, neither have done so at Roland Garros. This year could be their chance.

Arina Rodionova (AUS) v Vera Zvonareva (RUS)
Women’s singles qualifying, second round, Court 7, first match (6pm AEST start)
After scoring her first Roland Garros win in 10 years, Rodionova’s reward is a showdown with former world No.2 Zvonareva. The 36-year-old Russian, a mother of one who is currently ranked No.182, is targeting a 10th main draw appearance in Paris. This is their first career singles meeting, however the No.165-ranked Rodionova did score a doubles win against Zvonareva in Rome earlier this month.

[9] Astra Sharma (AUS) v Yuki Naito (JPN)
Women’s singles qualifying, second round, Court 7, second match
Although both players scored career-first Roland Garros wins in the opening round, the 19-year-old Naito has enjoyed junior success in Paris. The world No.186 was a French Open girls’ doubles finalist in 2018. The No.134-ranked Sharma, who made a first-round exit in her French Open main draw debut last year, lost her only previous meeting against Naito via retirement last year.

[12] Marc Polmans (AUS) v Liam Broady (GBR)
Men’s singles qualifying, final round, Court 3, third match (not before 9pm AEST)
Aiming to qualify for a Grand Slam for the first time in his career, the No.122-ranked Polmans faces a 26-year-old Brit ranked No.206. The left-handed Broady has not dropped a set in a career-best run in Paris and is also trying to qualify at a major for a first time. Broady has a 3-1 win-loss record against the 23-year-old Australian, however Polmans won their most recent meeting in 2018.

Aleksandar Vukic (AUS) v [15] Jason Jung (TPE)
Men’s singles qualifying, final round, Court 11, third match (not before 9pm AEST)
To earn a Grand Slam main draw debut, the No.190-ranked Vukic needs to defeat the No.125-ranked Jung. The 31-year-old from Chinese Taipei is enjoying a career-best run in Paris and overcame five-time Roland Garros quarterfinalist Tommy Robredo in the second round. Jung is also looking to qualify at a Grand Slam for the first time. This is their first career meeting.