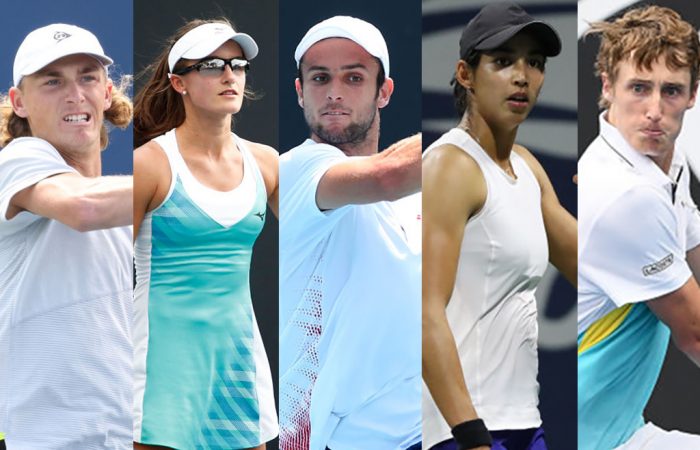 The biggest lesson from the opening two days of Roland Garros qualifying has been that anything can happen.

Only 14 of the 32-seeded players in the men’s singles draw survived the opening round. Australia’s Marc Polmans was one of them, with the No.12 seed matching his career-best result in Paris.

The 23-year-old Polmans is one of three Australian men remaining in the draw, along with Aleksandar Vukic and Max Purcell.

After making winning debuts in Paris, the 24-year-old Vukic and 22-year-old Purcell both face seeded opponents as they continue their pursuit to qualify for the main draw.

Australian women Astra Sharma and Arina Rodionova begin their own qualifying quests today. They each face lower-ranked opponents in their first round matches – but enter wary that no opponent can be underestimated when a Grand Slam place is on the line.

[9] Astra Sharma (AUS) v [WC] Irina Ramialison (FRA)
Women’s singles qualifying, first round, Court 14, first match (6pm AEST start)
The No.134-ranked Sharma faces a French wildcard. Ramialison, a 29-year-old ranked No.371, made an ITF final in Sharma’s hometown of Perth earlier this year. The 25-year-old Sharma, who lost in the opening round of the main draw last year, is seeking her first career win at Roland Garros. This is the first time they have played.

Aleksandar Vukic (AUS) v [29] Prajnesh Gunneswaran (IND)
Men’s singles qualifying, second round, Court 5, third match (not before 8.30pm AEST)
In his Roland Garros debut, the 24-year-old Vukic saved two match points in his opening round win. The world No.190’s next opponent is the experienced Gunneswaran. The No.141-ranked Indian, a left-handed 30-year-old, achieved a career-high ranking of No.75 last year. This is their first career meeting.

[12] Marc Polmans (AUS) v Alessandro Giannessi (ITA)
Men’s singles qualifying, second round, Court 15, third match (not before 8.30pm AEST)
The No.122-ranked Polmans matched his career-best result at Roland Garros with a comprehensive first round win earlier this week. The 23-year-old from Melbourne now faces No.171-ranked Giannessi, a 30-year-old who has beaten the Australian in their two previous meetings. The left-handed Giannessi has been ranked as high as No.84.

Max Purcell (AUS) v [7] Aslan Karatsev (RUS)
Men’s singles qualifying, second round, Court 15, fourth match (not before 10pm AEST)
Karatsev has amassed a 16-1 win-loss record since the tour resumed, claiming back-to-back ATP Challenger titles on clay in recent weeks. It has catapulted the 27-year-old Russian to a career-high ranking of No.116. The No.227-ranked Purcell has been showing promising form too, not dropping serve in his opening round win.