With a wealth of experience and a passion to develop greater depth in Australian tennis, Paul Vassallo is helping set new player pathways as Director of Talent at Tennis Australia. 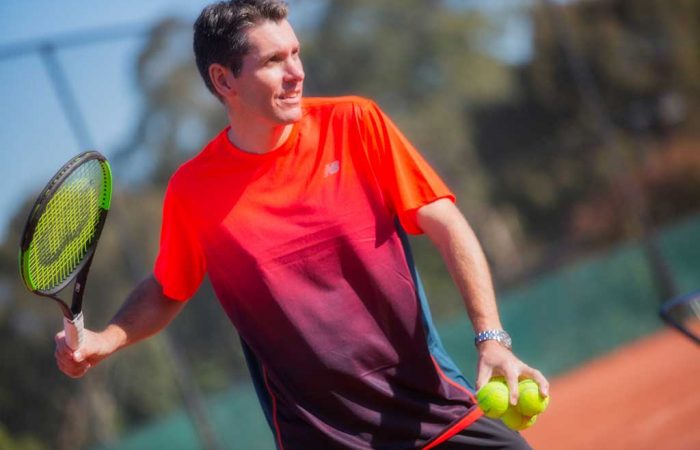 Among the many qualities Paul Vassallo can bring to his role of Director of Talent at Tennis Australia, the empathy and understanding created by many years in the game could well be the most powerful.

Vassallo is a passionate sports fan and participant who competed at state level in several pursuits – including tennis, which he first played at age eight – before he took his first impactful steps in a coaching career more than 20 years ago.

“I played all through my junior life and then while I was at university, I started coaching part-time and I just had a passion for it,” said Vassallo.

“Seeing people improve every week and being a part of their journey in life, that was really rewarding.”

A wealth of experience in the private sector has since been accumulated as a part-owner of a commercial sports centre and over the past decade, at Victorian tennis clubs.

“I was running programs across ANZ Tennis Hot Shots through to kids who were travelling, playing ITF Juniors and college tennis,” Vassallo related.

“I’ve covered a lot of angles.”

That commitment is now channelled into a key role created in the recent transformation of Tennis Australia’s player development pathway.

As Director of Talent, Vassallo has overseen the set-up and implementation of National Development Squads, which are now operational in every state in Australia.

“It’s different to the National Academies of the past, where there were quite different levels of criteria. So different players in each state would receive different offerings and levels of support,” he related.

“Now if you are eligible for a National Development Squad, then you’re not going to be offered any more or any less than the next person.

“It’s a base offering for anyone who reaches a criteria, where they will receive up to two on-court sessions per week in a squad, two strength and conditioning sessions and one match play opportunity.”

Those match play opportunities can potentially be undertaken by players working with a coach in a private venue – pointing to another key change in the National Development Squad set-up.

“A big part of actually bringing it all together is working with private coaches and helping them work with their players to a create a full weekly schedule and program across the year for those who need or want support,” said Vassallo.

“There’s people as good as, but I don’t think there’d be a team that’s better in the country.”

As Vassallo and National Development Coaches focus on developing Australia’s next generation of players, there’s also a strong connection with Brent Larkham (Head Coach) and Chris Mahony (Head of Operations) at the National Tennis Academy in Brisbane.

“We are hopefully a flow-on, with kids coming out of our program and into theirs,” said Vassallo.

“(It’s important) for us to help be their eyes and ears for players that are under 15 that might be tracking towards their program.”

A greater depth of players throughout all age groups feeding into the National Tennis Academy is in fact a key measure of success and Vassallo explains how that target can be quantified through the Universal Tennis Ratings.

“We can keep UTR statistics year on year and see (for example) if there were 100 boys under 14 in 2020, what their UTR was. We can then to go 2023 and see if there’s been an improvement overall in the depth. That’s what success will be – more players and a greater depth and ability.”

Armed with a clear objective, Vassallo is tackling some early challenges – especially limitations on training or competitive opportunities amid COVID-19 restrictions – with a strong focus on the bigger picture.

“What excites me the most is hopefully what the end goal is – seeing our program come to life, seeing a better connection with private coaches and private coaches having a longer journey with their player and more influence working with our team,” he said.

“As a result, hopefully as I said, more kids playing the sport at a competitive level into older age groups and having a greater depth through those age groups.”