Ajla Tomljanovic is preparing for a Grand Slam return at the US Open with a deep appreciation for her time on tour. 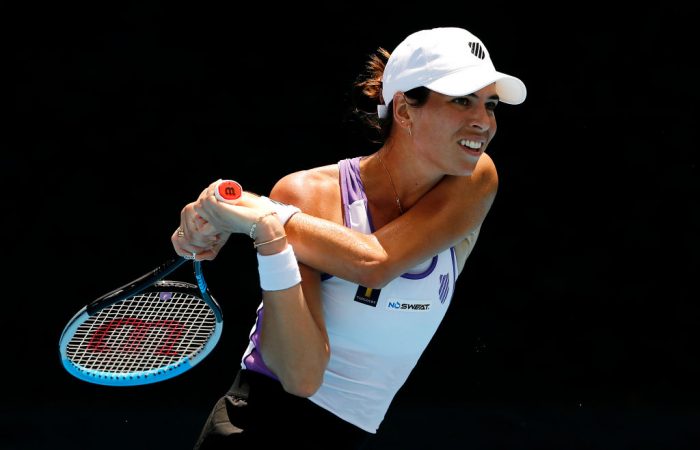 Few players appreciate their time on tour as much as Ajla Tomljanovic.

With a serious shoulder injury robbing her of much of the 2016 season – and arresting momentum of her top-50 debut as a 21-year-old early in 2015 – Australia’s No.2 woman now wholeheartedly embraces every opportunity to compete.

“It is just so great to be here,” Tomljanovic told Todd Woodbridge from New York in a Facebook Live interview. “I’m definitely one of those players that’s going to play wherever (tennis is) happening.”

It’s an outlook that means that the 27-year-old is not merely taking the new reality of professional tennis in her stride, but also seeing the positives as players and officials manage the global COVID-19 pandemic.

For the first time in Grand Slam history, the 2020 US Open will be staged without fans on site, with players and their entourages maintaining a strict safety bubble that sees them largely confined to the tournament site and their hotels.

“Yeah, it’s very different than your usual US Open experience,” Tomljanovic admitted. “So apart from the courts and the hotel there’s not much more, but we get to interact with each other way more than we usually would.

“They’ve created a little patio outside where every night there’s like a food truck and people just come with their own dinners and there’s still a lot of social distancing involved.”

There’s also the opportunity to enjoy Flushing Meadows in a new way. Typically buzzing with crowds and media, players rarely experience the venue from an “everyday” perspective. This year, they can freely roam the grounds.

“It’s just nice to also be outside when there’s no spectators. We actually finally get to see the site for what it is, because usually we avoid it with the tunnels,” related Tomljanovic, explaining that activities including mini golf, table tennis and chess are available in usually public spaces.

“And they’ve created small outside areas where you can just chill when the weather is nice. In that sense, I’m really enjoying it.”

Tomljanovic was acquainted with the protocols required in actually competing amid COVID-19 challenges at a UTR exhibition event in Florida and in World Team Tennis, where she represented the Vegas Rollers. She admitted it was initially tough to adjust to competing without fans.

“Reality hit that, you know, you could hear a pin drop. And it was also only one court where we were playing at, so it was very different that first event,” she said.

“But then I played another one in Charleston, which was a team event and even though there were no spectators, it was quite different. I was little more ready and more in a competitive spirit and I kind of felt that again, which was more similar to when I play tournaments before.”

Despite consecutive opening-round losses in her first WTA events since February – Tomljanovic exiting to Veronika Kudermetova in a three-set battle at last week’s Western and Southern Open – the world No.57 is both physically and mentally prepared for her US Open campaign to kick off.

While maintaining fitness during the interrupted season, Tomljanovic has also embraced the time to reflect on her career so far.  A social media post showing a young Ajla with her father Ratko at a tennis centre was especially notable, prompting questions on the role he’d played in her rise.

20 years later not much has changed

“I was lucky enough to have my dad be on this journey with me since I was that little,” said Tomljanovic, who followed her sister Hana into tennis at the seven of seven.

“And you just don’t see it often in sport that it works out, because it’s actually quite tough at times but we both are fortunate that we’re pretty successful at separating our father-daughter relationship and player-coach.”

In her time off tour, Tomljanovic also considered recent on-court highs. Born in Zagreb, Croatia, but a long-time representative of Australia, Tomljanovic was thrilled to make her Fed Cup debut in the final against France in Perth last year.

“Up to date, that was my favourite memory in my career,” said the Australian, who recovered from a loss to Kristina Mladenovic on the opening day to record a solid victory over Pauline Parmentier.

“It was the biggest crowd I’ve ever played in front of and the energy was something else, but to me it was more the team that I was a part of. (It) made a huge difference.”

Now Tomljanovic has the chance to create other special memories as her US Open campaign commences against No.18 seed Angelique Kerber in the first round.

She’s played the former world No.1 just once before, losing to the German in the second round of the French Open in 2015.

Tomljanovic recognises that despite Kerber’s three major titles – including the 2016 Australian and US Opens – the game is arguably more open than it’s ever been.

“The way tennis is these days you see players beating each other no matter the ranking and especially with this with this big time off,” she said. “The important thing is that I’m feeling good and I like the way I’m hitting the ball.”

There’s also confidence from recent progress, Tomljanovic reaching a fourth WTA final at Hua Hin and posting two top-10 victories (over Aryna Sabalanka in Miami and Kiki Bertens in Zhengzhou) last year. In April, she peaked at a career-high world No.39.

But most important is Tomljanovic’s clear appreciation that after such a difficult period, the return of Grand Slam tennis offers new hope to both players and fans.

“I think that the fact that the US Open’s happening, it gives a little bit of hope to people that even in times like this we can find a way,” she said.

“And for me personally. I have more appreciation just for hugs and you know spending time with people without thinking … I think we’re all going to have a little bit of a different perspective when things get better.”