The world No.43-ranked Australian explains why he chose to play in America and what the experience has been like so far. 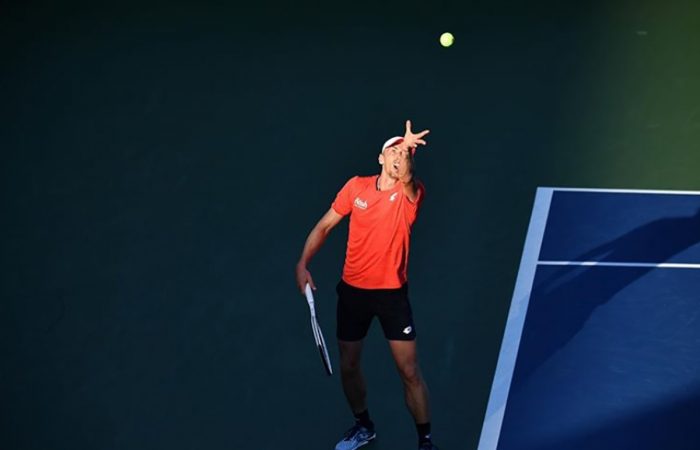 John Millman is currently in New York, preparing to make his sixth consecutive main draw appearance at the US Open.

This Grand Slam tournament is like no other though. It is the first played since the COVID-19 pandemic shutdown professional tennis for over five months and there will be no fans on site, one of many strict safety measures introduced to keep players safe.

Millman admits he was apprehensive about competing in the United States, where there have been more than five million cases of COVID-19.

“The temperature back home surrounding COVID is one of caution, apprehension and massive concern. I feel like in Australia, the Australian government and people have taken this extremely seriously as a whole nation,” the 31-year-old from Brisbane said.

“Admittedly at the start when I heard we were going to be playing the US Open, especially when you see all the cases they have got here, it was something I was concerned about and I think I had every reason to be.”

I love the US Open but it seems a little crazy that we’re still contemplating playing a grand slam there, right?

Yet having not played since Australia’s Davis Cup qualifying round win in Adelaide in early March, Millman was also keen to return to tour.

“This is our living and like every Australian, we need to start making a living again. I was excited to get back,” he said.

“I weighed up the pros and cons – obviously and honestly, there were cons to playing. But the excitement that I can enjoy doing what I’ve been doing for a long time now, which is playing tennis and competing on the biggest stage, outweighed the cons.”

Millman described travelling to New York as a ‘weird’ experience.

“It was really strange travelling,” admitted Millman, who flew via Doha. “The atmosphere that exists at airports now is of apprehension. It was just uncomfortable. I travelled with a face shield the whole flight because that was a requirement.

“I was at the back of the plane too because I haven’t made money for six months.”

The Western & Southern Open, usually played in Cincinnati, relocated to New York to minimise the need for player travel across America and a biosecurity ‘bubble’ has been created for players and their teams.

“The USTA have done a fantastic job,” Millman said.

“Life in the bubble is good. We are a fair bit away from New York City. They have got security everywhere and I think all the players are embracing it. They have created a really nice atmosphere at the hotel. There are food trucks every night at the hotel, which is awesome. I’m loving the diversity of that. I’m a big food truck fan back at home and we haven’t really been able to do that for a while, so that’s been awesome. They have outdoor entertainment areas, they’ve got arcades, they’ve got recovery rooms set up. I think they’ve done a really good job and gone above and beyond their capabilities to create an environment where the players feel comfortable.”

First impressions of the US Open series are really positive. It’s noticeable how hard the USTA has worked to create a comfortable and safe environment. I’m pumped to be back playing. Top effort from the entire USTA team.

“For tennis to get going, we have to be really careful and strenuous in our testing,” Millman said.

“I think it’s really important that they tick all the boxes and it feels as if they are with the amount of testing we are doing.

“It’s uncomfortable but I haven’t heard any negativity from players saying ‘oh, I have to do another test’. It is just something we have kind of embraced and realised it’s part of the process now and life of being a professional tennis player.

“To be a little uncomfortable for a few minutes is a pretty small sacrifice.”

Despite struggling with a shoulder injury, Millman made an encouraging return with a first-round win against world No.38 Adrian Mannarino at the Western & Southern Open earlier this week.

“To chalk up a win straight off the bat, I mean it’s like ‘okay we’re back. I can still play at a pretty decent level and we’re back playing tennis, which is pretty awesome’,” the No.43-ranked Millman said.

After a three-set loss to world No.21 John Isner in the second round, Millman has turned his attention to final US Open preparations.

The Grand Slam tournament, where Millman defeated Roger Federer to make the quarterfinals in 2018, begins on Monday.