As Australia prepares to meet in Brazil in Davis Cup, captain Lleyton Hewitt is proud of the passion shown by Nick Kyrgios, Alex de Minaur and other players. 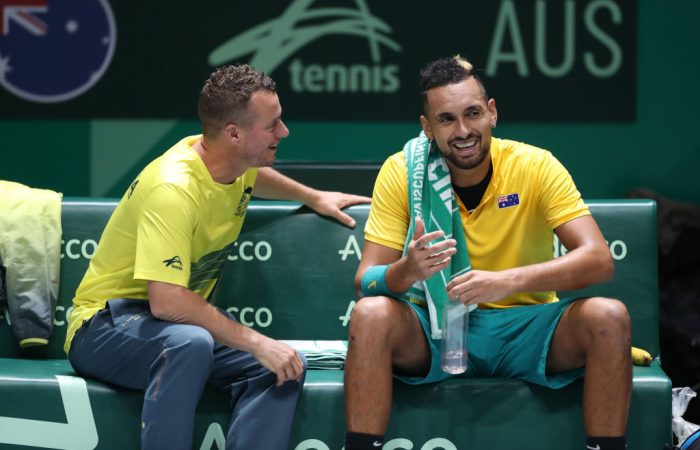 Lleyton Hewitt famously loved a challenge in his Davis Cup playing career; now the former world No.1 has discovered a new one as the Australian captain – how to choose a team of five representatives at a time of increasing depth in the men’s game?

“I don’t know how I used to do it with four (players being allowed for selection). I don’t know how Newk and Rochey and Fitzy and everyone did it. Five is still not easy,” laughed Hewitt as he discussed the team that will take on Brazil in next week’s Davis Cup qualifying event at Memorial Drive in Adelaide. “We gone with the five guys currently in the top 71 in the world.”

One team in Adelaide 🙌 One @DavisCup goal

It’s of course a welcome problem for Hewitt, as Nick Kyrgios, Alex de Minaur, John Millman, Jordan Thompson and James Duckworth return home to represent their nation. While most of those players bring proven team credentials to their latest Davis Cup assignment, Hewitt is also buoyed by Duckworth’s debut in the team.

“He’s had a tough probably five years or so with a lot of injuries. But he’s gone out and done a lot of hard work to get his body right to be able to compete. His results are speaking for themselves at the moment,” said Hewitt of the Sydneysider, who reached a first ATP semifinal in Pune and won an 11th Challenger-level title in Bengaluru to peak at world No.71 this month.

“He’s got up to a career high last week in the rankings and I know what it means for him to be part of a Davis Cup team. He’s been a hitting partner on numerous occasions and I think this is good satisfaction for him, a guy that’s worked extremely hard. Even at the age of 28 even to get the opportunity (to play).”

“He’s a kid that wants to do everything in a hurry. He’s had to take that sort of back seat for the last few weeks,” said the team captain of De Minaur, who played his first match since the ATP Cup at Acapulco earlier this week.

“It hasn’t been easy for him seeing everyone else out on the tour playing. But he gets his opportunity. I think it’s good that he’s waited for the right time to go out there and play again.”

And while Kyrgios has played sparingly since a fourth-round run at the Australian Open secured his return to the world’s top 20, Hewitt is confident the No.1 Australian will give his best in the team event.

“Sometimes coming into a Davis Cup tie you want guys to play a lot of matches. Nick on the other hand is a guy that the ball-striking is going to be there,” said Hewitt of Kyrgios, who withdrew from Delray Beach with a wrist injury and retired from the first round in his Acapulco title defence with the same injury. “It’s about him being mentally and physically ready to compete.”

The commitment is especially welcome as Hewitt anticipates next week’s challenge. “Brazil who we’re playing are a tough prospect for us,” he admitted. “Singles wise they’re led by (Thiago) Monteiro. They’ve got another young kid (Thiago Seybold) Wild (ranked world No.88 and No.182 respectively.”

“So they’ve got quality players we’ve got to focus on. Our goal is to put ourselves into a position to be in the Madrid and give ourselves the opportunity to play for the Davis Cup.”

Hewitt does so knowing he has full commitment from passionate Australian players, with the team aiming to improve on a quarterfinal showing at Madrid last year.

“You want guys to make themselves available. I think that’s the most pleasing thing,” said Hewitt, noting that high-stakes events at Indian Wells and Miami immediately follow the Davis Cup week.

“For them to come back and make themselves available for Davis Cup sort of shows where the Australian tennis culture is at the moment. For me, that’s something I like to be a part of.”