On the eve of the Australian Open, several of Australia's main-draw hopes spoke to the media as they prepare for their 2020 campaigns at Melbourne Park. 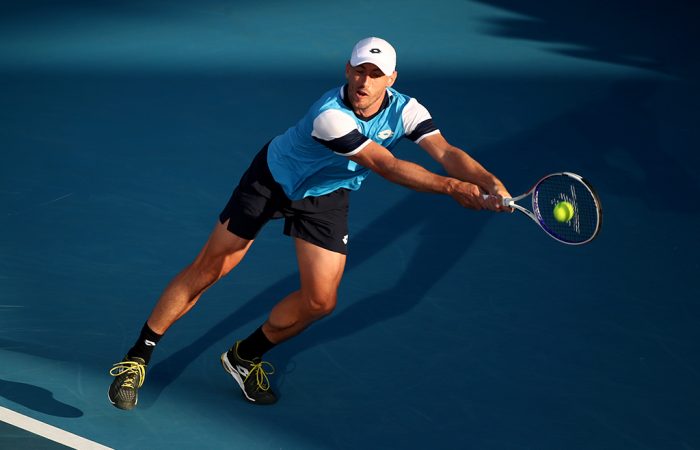 In mid-September Millman was ranked No.95 until a purple patch of form – including a run to the ATP 500 final in Tokyo – saw him slash his ranking to 48th within the next two months. The 30-year-old remains in the top 50 and has opened season 2020 strongly, winning four of his five singles matches and reaching the ATP Auckland quarterfinals. He begins against Ugo Humbert of France.

“Really happy with how it (2020) started off. Obviously not ideal circumstances I came in to play those couple of matches (at the ATP Cup) but really grateful I got the opportunity to play those couple of matches and in Brisbane too which as a place close to my heart there. You want to get some matches on the board, get a few wins early on and get some momentum and then in Auckland I thought I played really well. Two good wins to begin with and then went out in three tight sets to Benoit Paire.

“I feel like I’m playing some good stuff I’m going to have my work cut out for me in my match for sure after the draw got done. But I’ll be ready to go tomorrow.”

The 26-year-old enjoyed a season of firsts in 2019, including cracking the top 40 and making her Fed Cup debut for Australia. Currently ranked No.52, the Aussie women’s No.2 has already notched first-round wins in Brisbane and Adelaide and comes into the Australian Open with four matches under her belt.

“I think I’m happy with where my game is at. I’m feeling really good when I’m on the court, when I kind of hit. I think those two matches were really good quality but just the little things that I need to fine-tune to actually come out with a win. They’re small things that make a big difference but they’re maybe not as easy to do. But I feel like I’m on the right path and I feel pretty good coming in.

“I think for us coming here (to Melbourne) it’s always that fine line between pressure and excitement and anxiety all mixed into one. But I think – especially after Fed Cup – that I’ve kind of found a way to turn that into more the fun anxiety that exists. That’s when it kind of becomes just fun at the end of the day. But I think it’s good to be nervous just before. It means that you care and it means a lot to you, and it should.”

After winning just one tour-level match in 2018, Thompson won 26 in 2019. He hit a career-high ranking of No.43 in July after reaching the final of the ATP tournament in ‘s-Hertogenbosch, the fourth round of the Miami Masters and third round at Roland Garros, a career-best Grand Slam result. He opens against Alexander Bublik.

“I’m not too worried (about my form). I lost to a top 50 guy last week (in Adelaide) 6-3 in the third, so it was pretty tight. I just need to fine-tune a few things. It’s great to be back (at the AO), I love coming back. I used to train here and I feel very comfortable.”

The world No.95, who opens against Jo-Wilfried Tsonga, won matches at all four Grand Slam events last year, progressing to the third round at the Australian Open – where he fell to Lucas Pouille in five – and the US Open. He peaked at 87th in the ranking after ending 2018 at No.151.

“It’s still one of my favourite matches (against Pouille) I’ve ever played. Even though I lost it was an unbelievable match and I came back from two sets to love down. That was the first time I ever did that. It was the first time I ever played a five setter, so it was an unbelievable experience. I’m just excited to go out there and hopefully have a similar match to that.

Australian Open 2019 represented a breakthrough for Sharma, who qualified for the main draw then reached the second round, as well as making the mixed doubles final with JP Smith. After beginning the season outside the top 200, she soared to a peak of No.85 during a year in which she also reached her first WTA final in Bogota. She fell in her only tune-up event in Hobart to Lauren Davis in a third-set tiebreak.

“It’s so special (to be back). It’s just so familiar and comfortable here, and obviously the good memories help, and just really excited to start playing. Not even worried about the result — just can’t even wait to get back out there.

“I (only played one lead-in event because) was recovering from knee surgery. I had that at the end of November. I wasn’t sure how long it would take to recover, and I actually recovered a lot quicker than what was expected. In the end Hobart was the one I could make. If I’m going lose, that’s almost how I’d want to. Just because I know that I put myself in the best position, I had opportunities, the match was a lot of times on my racquet. It’s reassuring to be in positions to win, and just unfortunate that the execution wasn’t there. But the level was there, so I was pleased with that.”

The young Queenslander surged from world No.272 in mid July to No.130 by season’s end, helped by three ITF titles. Already with a Hobart quarterfinal under her belt this season, Cabrera – a main-draw wildcard – opens against American qualifier Ann Li at the Australian Open.

“It was a really good week (in Hobart). I was happy to get a few top 50 wins, it was a perfect lead-up to the Australian Open. As soon as you walk in (to Melbourne Park) you get all the feelings back. I’m super stoked to be in main (draw) and really excited to play tomorrow.

“I know (Li) pretty well, she’s one of my friends from the States. I know it’s going to be a tough match. She did really well in qualifying, played some tough opponents.”

Hon rose to a career-best ranking of No.118 in October after an impressive season, during which she made her Australian Fed Cup debut and posted a WTA quarterfinal finish in Seoul. Despite first-round losses in Brisbane and Adelaide, she pushed Ajla Tomljanovic and Julia Goerges to the limit, and has drawn Kateryna Kozlova in the first round at AO2020.

“(Those results) give me confidence but at the same time I want to be winning these matches now. I don’t want to just be getting close. So I’m getting a little frustrated not getting it over the line at the moment. But I do believe but I belong there (at this level).

“(My lead-up) didn’t go amazing, but at the same time I’m ready for Aussie Open and that’s the main event, so hopefully I can do some damage this week. (Playing in Australia) is the best. I love being in Australia. It’s not long enough (laughter).”

Few Aussie players come into the AO with as much form as Rodionova, who last month won four matches at the AO Play-off to secure a main-draw wildcard before winning another three at the WTA event in Adelaide to reach the second round as a qualifier. The world No.201 opens her campaign at Melbourne Park against Kateryna Bondarenko.

“I’m trying not to put too much pressure on myself. It’s a Grand Slam, it’s a great experience regardless of the result. I’m just really happy to be here. Having three consecutive wins over top 100 players – Suarez Navarro, Potapova then Sloane (Stephens) – it really shows me I can compete at this level and I belong there. It’s huge, especially a week before a Slam, to get those wins.”

“I know (Bondarenko) quite well and we’ve played doubles a few times. She’s a great player and a tough competitor. I know she’s going to fight for every point, but I’m going to be doing the same so I think it’s going to be a good match.”