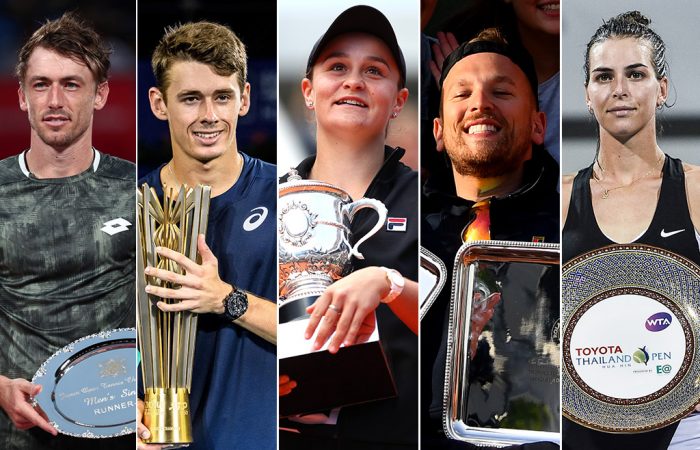 In an outstanding year for Australian tennis, a group of five formidable players — Dylan Alcott, Ashleigh Barty, Alex de Minaur, John Millman and Ajla Tomljanovic – have been nominated for the prestigious Newcombe Medal.

The Newcombe Medal is the highest distinction at the Australian Tennis Awards, held on 2 December at the Crown Palladium. The 10th edition of the annual awards celebrate the work and achievements of the tennis family, from club volunteers to emerging juniors, leading coaches and the nation’s elite players.

The Newcombe Medal, named after tennis legend John Newcombe who won seven Grand Slam singles titles in the 1960s and ‘70s, is awarded annually to Australia’s most outstanding elite tennis player and ambassador for the sport.

It is presented alongside 14 other awards to recognise the outstanding contribution of the wider tennis community.

Tennis Australia CEO Craig Tiley said the Australian Tennis Awards were a great opportunity to take time out to stop and reflect on an outstanding year in the sport of tennis.

“The Newcombe Medal, Australian Tennis Awards is a fantastic opportunity for us to get together as a sport and as a tennis family to honour the contribution of our tennis community, both on and off the court,” Tiley said.

“It is a time for us to celebrate and recognise the excellent achievements of our elite athletes, but also the hard work and dedication that occurs behind the scenes from our coaches, clubs, schools, volunteers and communities over the past 12 months.”

“I’m excited to be able to share the stories of our local heroes, and to call out the effort and professionalism of everyone who has helped to ignite the country’s passion for tennis.”