Fresh off winning the WTA Finals and locking up the No.1 ranking, Ash Barty turns her attention to one last goal – Fed Cup glory to end the season in style. It seems slightly ludicrous to think Ash Barty could improve upon a season that has already wildly exceeded her expectations.

The 23-year-old returned to Australia on Monday having just won the richest prize in tennis history at the elite eight-player WTA Finals in Shenzhen.

That marked her fourth title of the year — from six finals – but it wasn’t even the biggest. Even more significant was her French Open triumph, a maiden Grand Slam singles title that preceded her rise to world No.1.

Barty cemented her position in top spot with victory in Shenzhen, making her the first Australian female player in WTA rankings history to end a season at No.1.

But she’s not done yet.

“This is a week that I circled at the beginning of the year, one that we wanted to target as a team and as a nation,” Barty said on Tuesday of Australia’s Fed Cup final against France in Perth.

“It’s really exciting to be able to finish the year playing for your country — it’s pretty special and without a doubt it’s something that I’ve been looking forward to for a long time.

“Now we’re only a few days away from starting.

“It would be right up there (as an achievement) without a doubt. Midway through the year again really wanted to target (this) and make sure I was fit and healthy and doing everything possible to be right for this weekend.”

Sam Stosur, who joined Barty for Tuesday’s press conference, was another who had structured her season around the Fed Cup final. 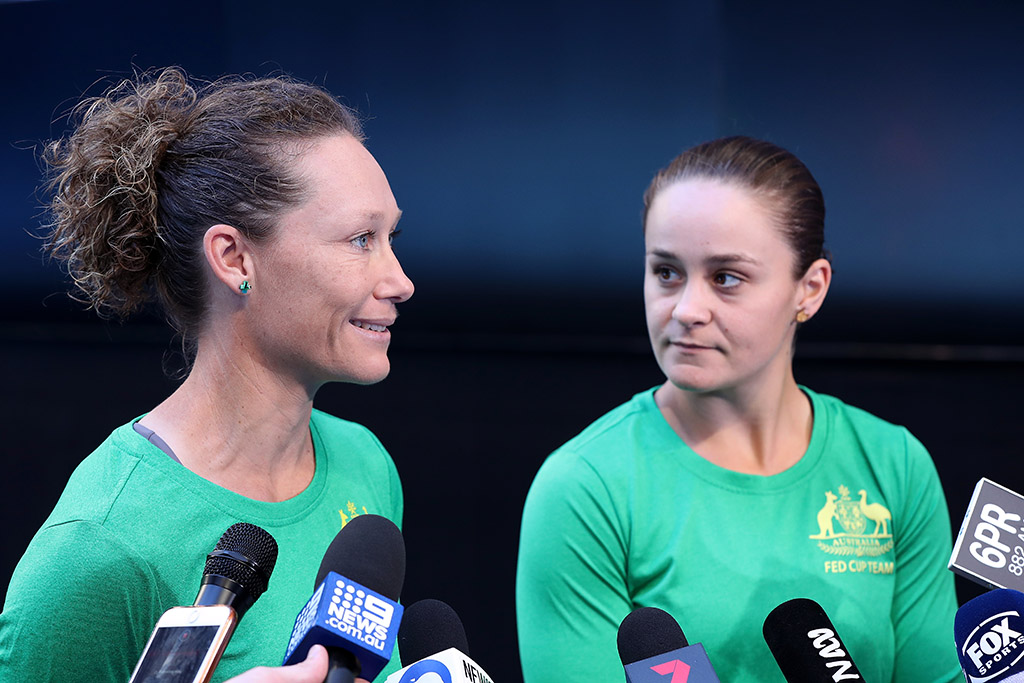 Like her fellow Queenslander, Stosur arrived in Perth straight from Shenzhen, having advanced to the semifinals of the doubles event with Zhang Shuai.

“Since we won that (semifinal) tie in Brisbane, it’s certainly been in the forefront of my mind to try and target this week and be at my absolute best,” she said.

“It would be incredible (to win it). I’ve played Fed Cup for I think 16 years now, loved every single time I get to go out there and represent my country. So to now be in a final — it’s been a long time coming.

“We want to try and make the most of it, absolutely. It would be right up there with one of the things you’ll always remember in your career.”

Considering the ongoing emotional highs of her breakout season, Barty said she was feeling as fresh as she could be at this stage of a long year.

The Queenslander notched 12 top-10 victories among 56 match wins in 2019, earning US$11.3 million in prize money along the way.

Tale of the Tape:

“You guys don’t stop about (the prize money I’ve won),” she laughed, addressing the media.

“It’s been an incredible year, it really has. I feel like that each time that I’ve felt like I’ve broken through some of my goals, we’ve set new ones and we’re able to break into those as well. So it’s been a really special year for myself and my team.

“It was a perfect way for me to start off my 2019 season playing Hopman Cup here in Perth, and I think to be able to end it, kind of come full circle and end the season playing for your country (at the same venue) is going to be really special too.”

Barty revealed that she would be wearing Aboriginal flag love-heart earrings, gifted to her by school kids in Perth, when she takes to the court this weekend.

As to who she will play is anyone’s guess – although chances are she could come face-to-face with France’s singles and doubles No.1 Kristina Mladenovic.

Mladenovic won the doubles title in Shenzhen just before Barty took to the court to capture the singles crown.

Arriving in Perth, last stretch of an amazing @WTA season! @FedCup 🇫🇷 vs 🇦🇺 ! Can’t wait! Look who I ran into! Some big time winners 🏆🏆@WTAFinals @KikiMladenovic @ashbarty What a joy that was to call both finals! @WTA_insider @womens10stalk1 @BillieJeanKing @FFTennis pic.twitter.com/oe5C2cdLZR

Australia has not lost a Fed Cup tie since early 2017.

“We’ve played Kristina enough on the singles and the doubles court; I think her name is going to feature prominently on the weekend for the French team,” said Barty, who is undefeated in her last 14 Fed Cup rubbers.

“But I think we know what to expect, so it’s about for us keeping it simple, creating a game plan and trying to execute.

“I think all of us are extremely hungry. It’s taken us probably two or three years to try and get ourselves into this position and now it’s about coming out and enjoying it this weekend.

“Playing for your country to finish off the year for everyone is going to be really special.”