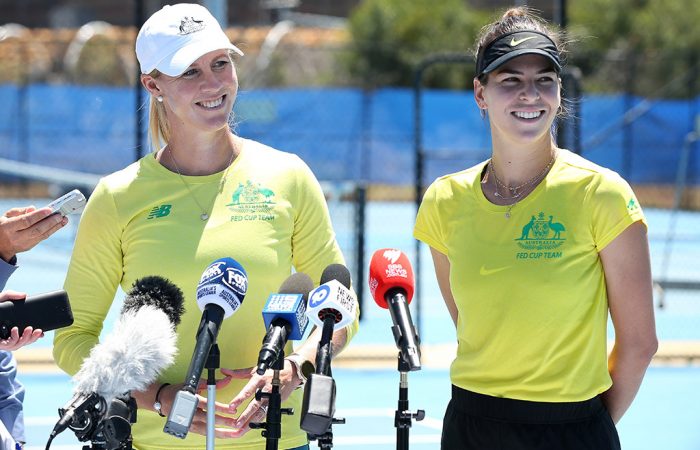 When it comes to this week’s Fed Cup final against France, Australian captain Alicia Molik has no shortage of options.

World No.1 Ash Barty will arrive fresh off her incredible victory at the prestigious WTA Finals. Sam Stosur will land in Perth just before her, after reaching the doubles semifinals at the same tournament.

Young guns Astra Sharma and Priscilla Hon both sit on the cusp of the top 100.

And the squad has been bolstered by the inclusion of Ajla Tomljanovic, the world No.51 who will debut in the team following a career-best season in 2019.

“This is what we’ve worked incredibly hard for the last couple of years, and now a home final — it’s pretty exciting,” Molik told media in Perth on Monday afternoon.

“The format changes next year so for us to have a final in Australia, it’s pretty amazing.

“Ash’s success the past number of months, at the French (Open) and now obviously a massive win yesterday, there’ll be a lot of interest in this team and I think a lot of support.

“It’s exciting too to have Ajla in the team for the first time.

Australia has not hosted a Fed Cup final since 1978, and has not won the title since 1974. The last time the green-and-gold featured in the final was in 1993.

The 45-year title drought could be broken this weekend at Perth’s RAC Arena, where Australia will arrive having won its past five Fed Cup ties dating back to early 2017.

Molik has reason to be confident, given the excellent form of her star players.

"Ash has been just so inspiring, ever since her comeback. What she's done for tennis in Australia is pretty unbelievable. So I think we all just try to draw from her." – @Ajlatom #FedCup #GoAussies pic.twitter.com/F1PCPhQOfk

“I’m just really impressed with the way Ash has tackled this year. Last week for the finals in Shenzhen, when everyone’s thinking about a break, Ash also has the Fed Cup final (ahead of her) and finishing off on another high note this week,” Molik said.

“I think she’ll ease into the week – she’s had a pretty intense week in China with a lot of big-time, big-pressure matches. So I know she’ll love getting home to Australia too, there’s nothing like it.

“Sam had an amazing tournament too in Shenzhen. She’s been in great form all year, won the Australian Open. And she’s carried her form in doubles right through this year. (Also in) Asia just three or four weeks ago (she) had some really great singles wins too.

“Ajla is one of the most dangerous players on tour — she has a game that more than match it with the best in the world. I’m rapt, every single player is rapt that Ajla’s in the team.

“It’s going to be a really tough decision on Thursday, as to who will be playing for us on the weekend. I’m pleased from my perspective as captain — I have a lot of options, and that’s really the ideal situation to be in.

“We’re really excited about our prospects on the weekend.”

The team will start slight favourites ahead of an impressive French line-up, headed by Kristina Mladenovic, the WTA Finals champion in doubles as well as the team’s top singles player.

After a hit-out on Monday at Perth’s State Tennis Centre, the teams will bump into RAC Arena from Tuesday to continue preparing for the tie.

It’s where the Australian team will start playing practice sets and matches and experimenting with doubles combinations before making the final decision on the team line-up.

That line-up will also depend on who France are likely to put forward, and Molik says she has been taking a keen interest in their performances and results this season.

“Mladenovic has been playing some great doubles right throughout the year, has won a few Slams. They come in with a lot of form.

“I’ve enjoyed watching the rise of (Fiona) Ferro — not many people are familiar with her on the tennis court but she’s a really impressive young player who had some great results, particularly in the US Open.

“But they’re really versatile. They also have a lot experience — they’ve made a number of Fed Cup finals in the last six or seven years. So they know what it feels like, they know how to bring their best tennis on the occasion, and they’ll be a pretty tough team for us to beat on the weekend.

“It’s going to be great tennis. They’re great competitors; I feel like we are the same.

“I think it’s going to be a brilliant display.”