In a reversal of fortune, James Duckworth enters the ATP Challenger final in Playford courtesy of a retirement. 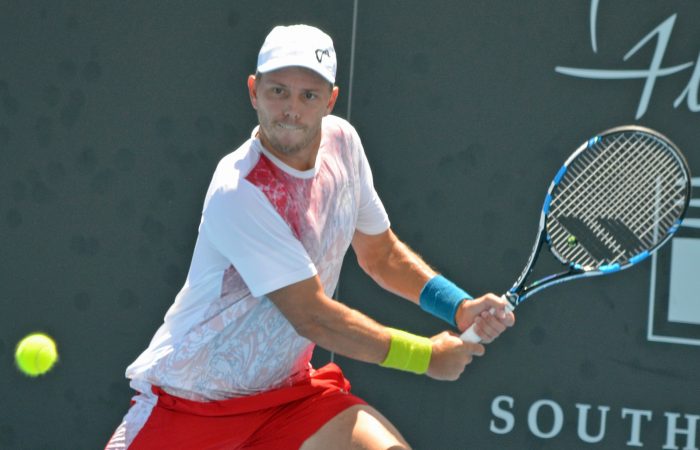 James Duckworth landed in his fifth ATP Challenger final this year after ousting Tatsuma Ito at the City of Playford International II on Saturday.

The second seed was ahead a set and a break when his Japanese opponent found himself unable to continue due to a shoulder concern, handing the world No.132 a finals berth with the score sitting at 7-5 2-0.

“It was a tough match,” Duckworth, 27, said. “The first four games lasted about half an hour and ended in four breaks which is pretty uncommon. We were both returning quite well.

“It was unfortunate for Tatsuma in the end, but funnily enough we played here in a semifinal in 2014 and I ended up retiring due to a shoulder as well. These things happen, but I thought I was playing some good tennis and I’m happy to be in the final.”

Duckworth has moved through the draw relatively untroubled this week, not yet dropping a set despite some extreme heat and wind in Playford.

“The conditions have been tricky so I’ve had to adjust each day,” he said. “I think I’ve done a pretty good job of that and now I’m just looking forward to tomorrow.”

Sunday’s final will be an opportunity for Duckworth’s to claim his third ATP Challenger title of the year, with wins in Bangkok and Baotou already under his belt.

“I‘m really pushing hard these few weeks to get my ranking as high as I can. Hopefully I can keep progressing,” he said.

He will face top seed Yasutaka Uchiyama, the Japanese ending Victorian Marc Polman’s chances of taking out consecutive titles after his win in Traralgon last week.

“He’s recently entered the top 100, so he’s in good form,” Duckworth said of his upcoming opponent. “There’s going to be a few chances here and there for both of us and it’s just going to be about who’s able to take those.”

In the women’s event, a repeat of last week’s Bendigo final saw third seed Lizette Cabrera defeat Maddison Inglis (No.2) 2-6 6-4 6-3, while earlier in the day wildcard Storm Sanders continued her outstanding run with a 6-4 6-3 victory over Japan’s Chihiro Muramatsu.