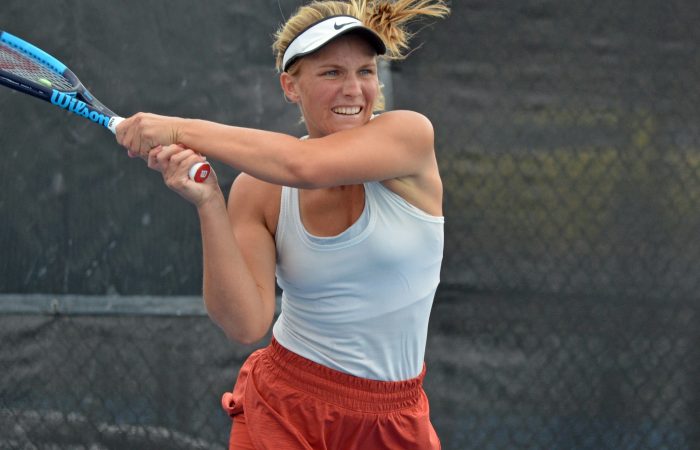 The third seed stood up to a stern test from Belinda Woolcock, dropping the first set in a tiebreaker but finishing strongly to take the match 6-7(5) 6-3 6-3.

“Luckily, I was able to get it back,” Inglis, 21, said. “I really enjoyed the match, it was a good battle and I was happy to get the win.”

Inglis will aim to make it four consecutive finals on the Australian Pro Tour after making the Brisbane final, before taking out Toowoomba, and then losing to Lizette Cabrera – her semifinal opponent in Playford – in last week’s Bendigo final.

“It’s been a big couple of months, this is the last tournament of the swing, so you’ve got to just empty the tank and see what you have left,” Inglis said ahead of the repeat Cabrera clash.

“The second time in two weeks, hopefully as bit different this time,” she said of the upcoming semifinal. “I think she played really well last time – sometimes the other player is just too good on the day – but maybe this time I can change up a few things and it will be a lot closer.”

“My goal was to get inside the top 150,” the world No.145 said. “I’ve done that, so I just want to enjoy being out on the court and competing as hard as I can. It’s been an awesome little run lately.”

Wildcard Storm Sanders joined Inglis in the semifinals, continuing her singles comeback with a 6-3 7-5 victory over eighth-seeded Brit Naiktha Bains. She will take on Japan’s Chihiro Muramatsu who defeated American Jennifer Elie.

In the men’s draw, the top two seeds made it through with relative ease. Japan’s Yasutaka Uchiyama lost the first set 4-6 and was 3-1 up in the second before Victorian Andrew Harris (Vic) was forced to retire. Second seed James Duckworth defeated Brit Jay Clarke in straight sets 6-3 6-3, while fellow South Aussies Luke Saville and Alex Bolt were unsuccessful on the local front, losing to Victorian Marc Polmans (No.4) and Japan’s Tatsuma Ito (No.3) respectively.