Wins to Zoe Hives and Ellen Perez mean seven Australian women are through to the second round of US Open qualifying, while Akira Santillan also progressed on Tuesday. 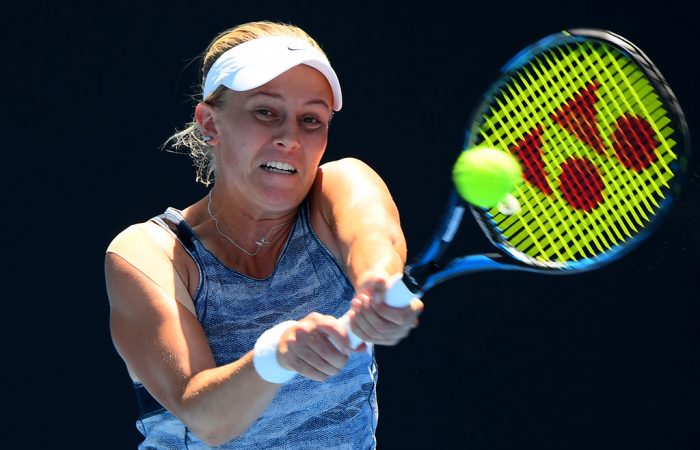 Zoe Hives and Ellen Perez became the latest Australian women to book a second-round berth at the US Open qualifying following their wins at Flushing Meadows on Tuesday.

Hives scored a fine win over former world No.42 Stefanie Voegele of Switzerland, while Perez notched a 6-3 6-3 victory over another Swiss player in Conny Perrin.

Perez, who has won seven of her past nine matches, next lines up against Romanian Ana Bogdan.

Hives, who reached the second round of this year’s Australian Open after claiming the notable scalp of American tour veteran Bethanie Mattek-Sands, came through 6-4 4-6 6-2 against sixth-seeded Vogele.

Meanwhile, Akira Santillan progressed to the second round following a 6-1 6-4 win over Serb Pedja Krstin.

He is the only Australian man remaining in US Open qualifying; countrymen James Duckworth and John-Patrick Smith fell in their opening-round matches on Tuesday, while Alex Bolt, Marc Polmans, Andrew Harris and Max Purcell lost on Monday.

Santillan, who reached the quarterfinals of the Lexington Challenger leading into the US Open, will next play Mario Vilella Martinez for a shot at a place in the final round of qualifying.

Perez and Hives — who clashed in an all-Aussie final at the recent ITF 60K tournament in Ashland, Kentucky — join Priscilla Hon, Lizette Cabrera, Maddison Inglis, Arina Rodionova and Jaimee Fourlis in the second round.

At least one Australian woman is guaranteed to reach the final round when Cabrera and Inglis play each other on Wednesday.