Jordan Thompson is now 3-0 in his head-to-head series with Jack Sock after a win in the first round of the ATP event in Washington DC, while Nick Kyrgios was a victory later on Tuesday evening. 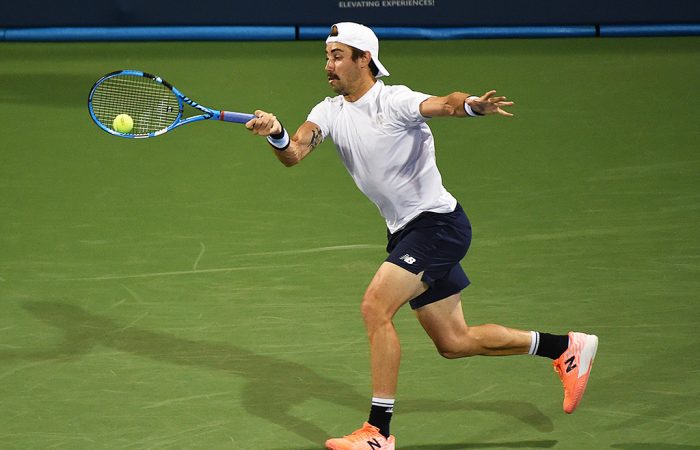 Jordan Thompson moved into the second round of the ATP 500 tournament in Washington DC after a straight-sets win over Jack Sock.

Later on Tuesday, Kyrgios joined his fellow Australian in the second round with a 7-5 6-4 win over American qualifier Thai-Son Kwiatkowski.

Thompson’s 7-5 6-3 victory over the former world No.8 was his third in three meetings with the American; he also beat Sock in Davis Cup and at the US Open, both in 2017.

The win sets up a second-round meeting with German Jan-Lennard Struff, the 14th seed.

Thompson had lost his last four singles matches but snapped that streak thanks to a 90-minute triumph over Sock.

Fellow Australian Alexei Popyrin was unable to join Thompson in the last 32, with the 19-year-old falling to fellow teenager Miomir Kecmanovic.

Serbia’s Kecmanovic won 7-6(6) 6-3 to progress to a second-round meeting with Pierre-Hugues Herbert.

Kyrgios played decisive tennis in a night match on Washington DC’s stadium court, blasting 40 winners — 20 on serve, and 10 each on his forehand and backhand — and winning 12 of 17 points at the net to beat Kwiatkowski in 92 minutes.

Were you not entertained?

“I played well today. I’m just happy to get through honestly,” Kyrgios said. “Haven’t been playing too much tennis, been going through some mental struggles, but super happy with the win.”

Next up for the 24-year-old is 11th seed Gilles Simon, a player Kyrgios has never before faced.

“The same thing for me every single match — serve big and play big and back my instincts,” Kyrgios answered when asked how he would approach the match.

“That’s what I’ve been playing for my entire career and we’ll see how it goes.”