In back-to-back matches on Court 12 at Wimbledon, Ajla Tomljanovic and Alexei Popyrin went down to quality opponents on Wednesday. 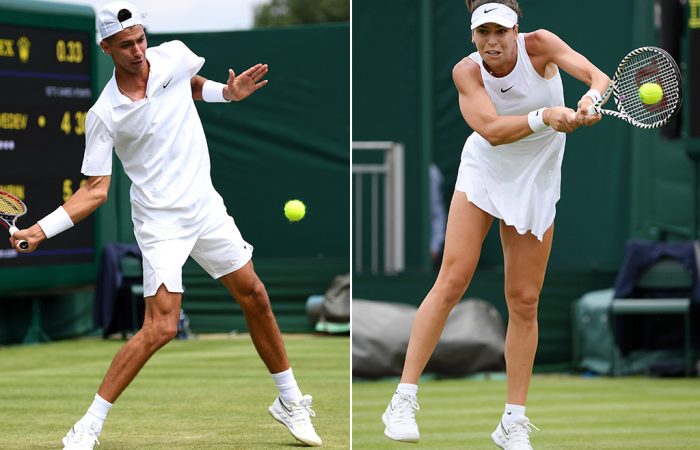 Alexei Popyrin and Ajla Tomljanovic both exited Wimbledon on Wednesday, beaten by tough opponents on Court 12.

Popyrin, a 19-year-old qualifier who had won four straight matches on grass, pushed the Russian hard but could not quite match his opponent’s consistency and intensity.

After taking a high-quality first set, Popyrin suffered a let down in the second and only managed to win one game. And after Popyrin broke Medvedev early in the third set and built a 3-1 lead, the Russian responded by winning 10 straight points, and 16 of the next 18, to wrest control of the match.

“I tried to do different tactics that me and my team worked on. I tried bringing him to the net. He’s not comfortable at the net, and I reckon I did that pretty well. Tried to mix up the pace. I reckon I did that well with my slices and just most of all just focus on my game; play aggressive, big serve.

“He kind of neutralised that serve today. I didn’t hit as many aces.

“Just a couple of mental dips that I’ve got to work on, but that’s it. That just comes from experience in my eyes.”

With 1987 champion Pat Cash in his corner, Popyrin displayed excellent instincts on grass during his Wimbledon campaign; against Medvedev he approached the net 71 times with a success rate of almost 70 per cent.

He also played bold, brave tennis in saving eight of the 13 break points he faced.

But the No.11 seed was simply too consistent, experienced and resourceful. He neutralised Popyrin’s serve well – Popyrin managed just six aces, after belting 15 and 26 in his previous two outings – and finished with just 21 unforced errors to the Australia’s 46.

“Every experience, every time I get to play a top-10 player I always feel like I’m in the match,” said a philosophical Popyrin. “I never feel like I’m being blown away, except for that match against Isner at Indian Wells (lost 6-0 6-2 in the second round).

“I always feel like I’ve got the game to compete with these guys – and beat them.”

Azarenka too strong for Tomljanovic

In the first match of Wednesday’s Court 12 schedule, Tomljanovic began brightly against Azarenka, breaking serve in the second game to lead 2-0.

But from there, Azarenka steamrolled through 12 straight games to wrap up a 63-minute victory.

The relentlessness shown by the two-time Australian Open champion was astonishing. Playing with intensity and aggression, Azarenka at the same time committed just 12 unforced errors while limiting the powerful Tomljanovic to only seven winners.

Anything short from Tomljanovic allowed Azarenka to wrench control of a point, and the Australian was under constant pressure to go for too much to push Azarenka off the baseline.

“Felt like it was vintage Vika out there today,” Tomljanovic said.

“Didn’t think I played my best obviously; had a really bad game at 2-0 (in the first set) which could have been way different if I’d held there, more pressure on her.

“But after that she didn’t give me anything and I had to play really well today to have a shot. Feels bad at this point.”

Tomljanovic held a 40-0 lead in the fifth game of the second set after also holding two games points in the third game, but could not avoid a second-set shut-out.

“Actually thought the second set was better than the first but score-wise it wasn’t,” Tomljanovic said.

“I didn’t serve great today to begin with and then even the ones I started making in the second set, I mean, she had an answer for everything.

“It was just one of the matches where I have to look at what I did good, bad, and not get too down because of the actual scoreline. Because I don’t think it was as bad as it looked.

“But it’s still really disappointing at this stage of the tournament.”