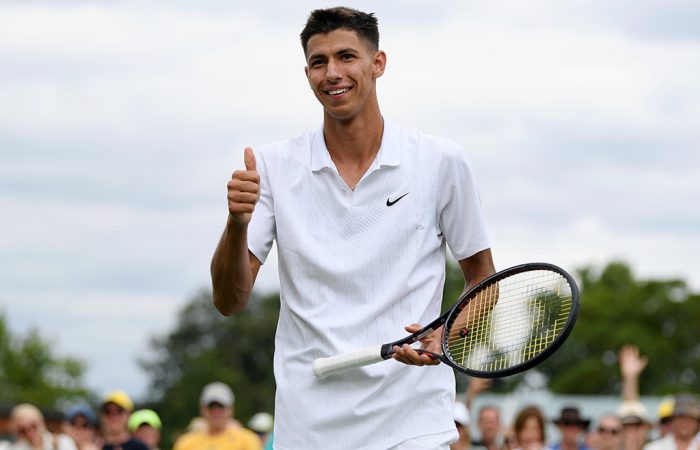 Alexei Popyrin has continued his dream run on London grass, winning through to the second round of Wimbledon with a resounding win over Pablo Carreno Busta on Monday.

Having won three matches at Roehampton last week to qualify for the main draw, the 19-year-old Australian dismissed the former world No.10 7-6(2) 7-5 6-2 in an aggressive display of all-court tennis.

Now on a four-match winning streak, Popyrin will look to continue his run when he faces 11th seed Daniil Medvedev – who beat Italy’s Paolo Lorenzi – for a place in the third round.

“It felt really good, having gone through qualies, having done all the hard work and getting that first-round win. It’s a special feeling,” Popyrin said.

“I knew he was a solid player, maybe grass is not his favourite surface to play on but I knew it was going to be a tough match, either way. I knew I had to stay focused and prepare.

Down an early break in the first set, Popyrin wrested control of the eighth game with a powerful return to bring up break point, which he converted after the Spaniard missed a backhand.

He dominated the ensuing tiebreak and broke serve early in the second set to assume control.

Carreno Busta is now ranked 50th but hving arrived at SW19 fresh off a semifinal run on grass in Antalya.

He broke back immediately to level at 3-3 and signs of frustration began to emerge at Popryin’s end of the court, with the Aussie earning six break points in two of Carreno Busta’s subsequent service games yet being unable to convert any of them.

But he refocused and broke on his seventh opportunity to take a 6-5 lead; he served out the second set in the next game, ending it with a leaping overhead winner.

“Definitely is frustrating (to miss multiple break points) but I was happy with the way I stayed composed and kept making those opportunities,” Popyrin said.

Popyrin visibly grew in confidence in the third as Carreno Busta’s resistance faded.

The Aussie rattled through games at an extraordinary pace, breaking in the very first game of the set and again in the seventh; after a forehand and backhand winner helped him reach 15-40, Carreno Busta surrendered serve with a double fault.

“That felt pretty good,” Popyrin smiled. “I had to serve where he wasn’t guessing. By the end of the match, he was guessing which way to go and I got a few guesses right.”

He finished the match with 15 winners among 56 winners – Carreno Busta only managed 18 winners – and won nearly 90 per cent of his first serve points. He was also successful on 28 of his 41 trips to the net.

“It (my net play) is something that Cashy (Pat Cash) and my team have been working on for a while now. It’s great to see it finally paying off,” Popyrin said.

“(I was most satisfied with) the way that I kept mentally composed after all those break-point opportunities that I had after breaking and then getting broken back straight away in the second set.

“Just the way I was mentally composed in the match (was pleasing).”