Barty confident she will be fit for Wimbledon

Ash Barty withdraws from Eastbourne with an arm injury, but insists she will be fit for Wimbledon. 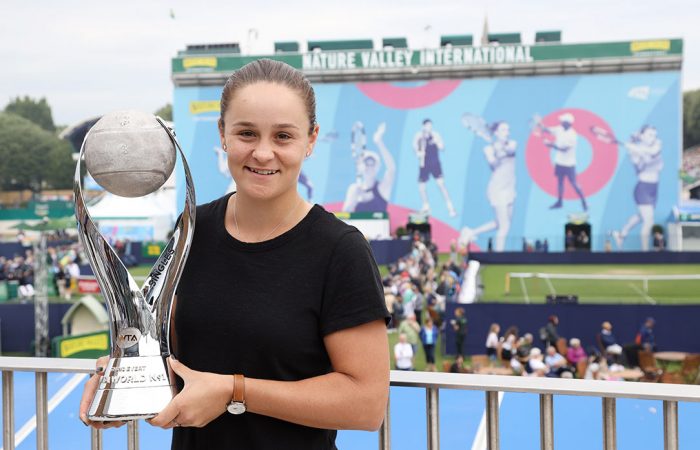 New world No.1 Ash Barty has withdrawn from this week’s Eastbourne International with an arm injury.

The 23-year-old insists the problem, which has affected her right arm since she was a teenager, will not hurt her Wimbledon hopes and has opted to rest following her success at Birmingham last week.

“It’s an injury I’ve had to manage since I was 16-years-old,” Barty explained.

“It happens when I have a spike in load, it’s just a bone stress injury and I need to look after it.

“We know how to manage it but it is important to get on top of it straight away.”

Barty still travelled to Eastbourne, where she was presented with the Chris Evert Trophy as the WTA’s new world No.1.

When your back was up against the wall time & time again you found a way to turn it around & fight 💪 you have always known what is best for you & done it your way 🌟 you are truly an inspiration sweetie & no one is more deserving of that number 1 ranking than you 🇦🇺 #1 @ashbar96 https://t.co/Me27ithHfx

Barty will be top seed at Wimbledon, which starts on July 1, but the Queenslander, who also played doubles at Birmingham before withdrawing at the semifinal stage, believes her plans for the All England won’t be hindered too much.

“We pulled out of the doubles to give it the best chance to be ready for (the) singles (final),” she said.

“It is time to let my body rest, and manage it as best we can to make sure we are ready for next week.

“At the moment we know how we have to plan it over the next three or four days so we know it can be as good as it can be. If we do that well we should be fine.

“It’s about rest, it’s time off court and then monitoring how many balls I do hit when I am on court.”

Barty will enter Wimbledon on a 12-match winning streak, having scooped titles at Roland Garros and Birmingham in the past month.

Fed Cup teammate Daria Gavrilova progressed to the second round at Eastbourne, scoring a 6-0 6-7(2) 7-6(6) victory over Switzerland’s Viktorija Golubic.

No.78-ranked Gavrilova faces China’s Zhang Shuai in the second round, while Sam Stosur is scheduled to play her first round match against newly-crowned Mallorca champion Sofia Kenin on Tuesday.

John Millman’s campaign ended with a three-set loss to fifth seed Fernando Verdasco in the first round. The Spaniard posted a 6-7(3) 6-4 6-1 victory.

Bernard Tomic advanced at the ATP event in Antalya, upsetting seventh seed Andreas Seppi 4-6 6-4 6-4 in the opening round.