Kyrgios, Tomljanovic out of Madrid

Nick Kyrgios and Ajla Tomljanovic lost their opening-round matches at the Mutua Madrid Open on Sunday. 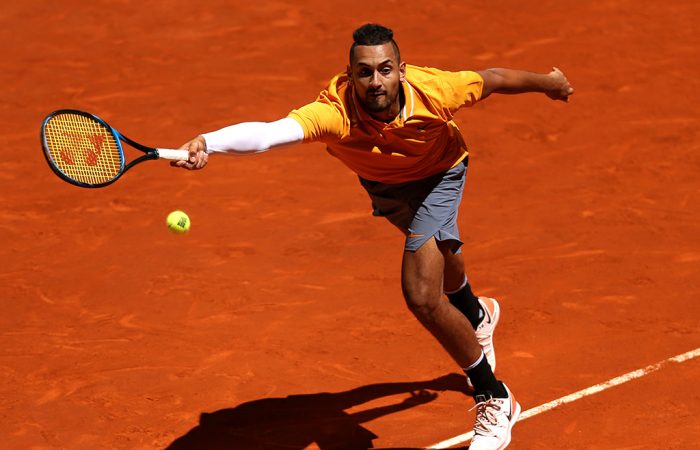 Nick Kyrgios’s start to the claycourt season ended abruptly with a first-round loss at the Madrid Open to Jan-Lennard Struff.

Also going down was Ajla Tomljanovic, who fell 6-3 6-2 to Mihaela Buzarnescu of Romania.

It was a tough turnaround for Tomljanovic, who had just arrived from Morocco after advancing to the semifinals of the WTA tournament in Rabat in different conditions to the altitude of Madrid.

On Monday in Madrid, Ash Barty will play Danielle Collins for a place in the third round. Alex de Minaur and John Millman will play their first-round matches on Tuesday, against Hubert Hurkacz and Steve Johnson respectively.

Struff was dominant on serve in the first set, with Kyrgios winning just three points on his opponent’s serve across six games and a tiebreaker.

It looked like things would turn around as Kyrgios capitalised on a double fault and some unforced errors by world No.48 Struff as he claimed a break in the opening game of the second set.

But the advantage wasn’t to last.

Struff ultimately levelled at 2-2, games staying on serve until he broke Kyrgios comfortably at 5-4 to take the match.

The German had been in recent good touch on clay with a quarterfinal run at the Barcelona Open where he enjoyed wins over David Goffin and Stefanos Tsitsipas before going down to Rafael Nadal.

It was another mixed bag from the world No.34 Kyrgios, who served well on occasion but was unsuccessful with his underarm deliveries and relied too heavily on dropshots to win some cheap points.

Kyrgios had been playing his first match since the Miami Open in March when he lost to Borna Coric in the round of 16.