Buoyed by a renewed sense of optimism, Daria Gavrilova is back in the Fed Cup team environment in which she thrives, and is hoping to help deliver Australia success in Brisbane. 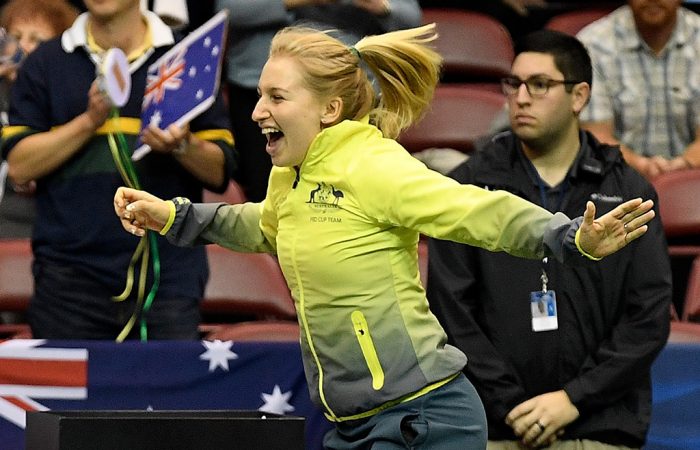 Daria Gavrilova is thrilled to be re-entering the Fed Cup team environment as Australia looks to progress to its first World Group final in 26 years.

The Aussie No.3 will this weekend fly up to Brisbane in preparation for the semifinal tie against Belarus, scheduled for 20-21 April at Pat Rafter Arena.

“I can’t wait,” Gavrilova said at Melbourne Park. “I was actually just on my phone and in my schedule I was like looking what’s next and the next thing was Fed Cup semis – I was like, oh my God, we’re actually in the semifinals!

The visitors will prove a tough assignment for the hosts given the depth in their ranks.

Yet Gavrilova hopes her team can get across the line and send Australia through to its first final in the team competition since 1993.
Australia last won the Fed Cup all the way back in 1974.

“It’s going to be a dream come true for our little team and the players because we’ve been talking about (this) since forever,” Gavrilova said.

“We truly did believe that we could get to semifinals and even win the whole thing and I think for tennis it’s gonna be pretty special.

“I know everyone’s behind us so we’re going to try and do our best.”

After a rocky start to the year – Gavrilova lost her first six singles matches of 2019 – the world No.58 turned a corner with a third-round run at Indian Wells last month, a result restoring some confidence.

Her next priority is to get 100 per cent healthy again, with her movement and training compromised in recent months by Achilles problems and plantar fasciitis.

And with new coach David Taylor set to join her entourage after the Fed Cup, there’s a renewed sense of optimism for the 25-year-old.

“I’ve actually known Dave for a while cause I’m really good friends with Sam (Stosur),” Gavrilova said of the new appointment.

“I was telling him ages ago that he’s already coached me, but he forgot about it. He helped me a little bit a few years back in Hong Kong, but I really look forward to it (this time) and I think he is too.

“We’ve already like set our own little goals, but first of all, I need to get healthy.

“I can’t wait to see him and start working.”