At a career-high ranking, Priscilla Hon will feature in Australia's Fed Cup team for the second straight tie, hoping to help the green-and-gold advance to the final. 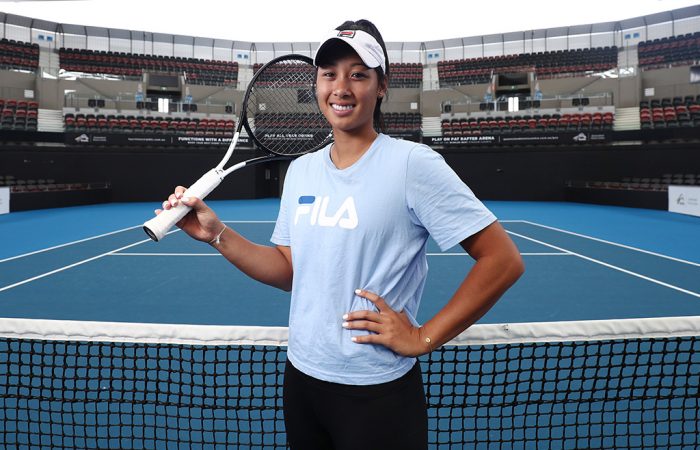 After a resounding debut in February, Priscilla Hon will return to Australia’s Fed Cup team for the World Group semifinal against Belarus on 20-21 April.

The 20-year-old Queenslander will be hoping to help the team advance to its first Fed Cup final since 1993.

“I can’t describe with words how much it means to me,” she said at a media conference on Wednesday at Pat Rafter Arena.

“I’ve trained here my whole life, I was born here (in Brisbane). I train at this centre hours every day so being able to play here in front of a home crowd – it will sound clichéd but it’s a dream come true.

“I got the call from Mol (Australian captain Alicia Molik) and I was so excited. I couldn’t wipe the smile off my face, but I had to keep it to myself for a while.”

Sitting at a career-high ranking of No.130, Hon made her competition debut in the cut-throat atmosphere of a decisive fifth doubles rubber against the United States in February.

Teaming with Ash Barty, Hon was the player who served out the 6-4 7-5 victory over Danielle Collins and Nicole Melichar, a result delivering Australia a 3-2 victory and sending the nation into its first World Group semifinal since 2014.

“Coming into this tie I definitely do feel a little bit more relaxed,” Hon said.

“Having to be in those pressure moments and being able to find something, and having Ash on the court with me really helps.”

“She (Barty) has showed herself that she’s one of the best in the world, and she’s achieved so much at such a young age. I’ve always looked up to her, growing up. I’m sure she’s going to do even greater things,” Hon said.

“Ash is top 10, Dasha’s in the 50s, Sam is a Grand Slam champion multiple times, so being able to be a part of the team is very special.”