In form Stosur back in Australian Fed Cup fold

With her major-winning doubles success beginning to translate to the singles court, Sam Stosur is hoping to help Australia oust Belarus and advance to the Fed Cup final. 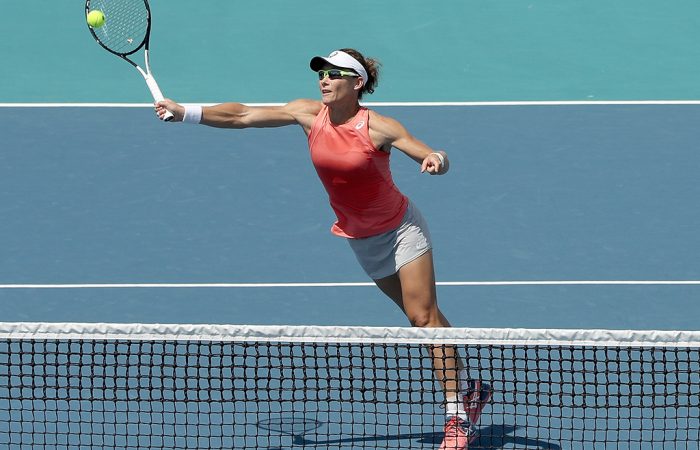 With partner Zhang Shuai, Sam Stosur is currently part of the world’s No.1 doubles team in 2019.

And she will be bringing that doubles prowess to Australia’s Fed Cup squad when they face Belarus on 20-21 April for a place in the World Group final.

Stosur will join countrywomen Ash Barty, Daria Gavrilova and Priscilla Hon at Brisbane’s Pat Rafter Arena, and is pleased to be back in the fold after missing February’s first-round tie in the United States.

“Like I told Alicia and Pratty at the start of the year when I said I wasn’t going to be able to play that first tie, I was not ruling out the rest of year,” Stosur told tennis.com.au.

“Playing Doha and Dubai (in February), where my ranking’s at, I felt like I couldn’t not play those events. If I didn’t, I pretty much wouldn’t have been playing for five weeks from the Australian Open until Indian Wells. And that’s not something you can do when you’re ranked 70 and trying to keep yourself in main draws (laughter). I needed to give myself that opportunity.

“This time around, yes I missed Charleston, probably my favourite tournament of the year, but it’s a good chance for me to come home, we’re in the semifinals, and I’ve wanted to play – it’s never about not wanting to play Fed Cup.

“This time around, this can be the priority, and that’s what I want to do.”

Australia's team to face Belarus in the @FedCup semifinals in Brisbane, April 20-21:

Stosur’s singles ranking remains in the 70s; she is currently No.73, but that’s up from No.83 two weeks ago after her trip to the third round in Miami.

She enjoyed an especially satisfying win over 16th-ranked Madison Keys in the second round, a player who in the very next tournament became the Charleston champion.

Leading 6-4 4-0, Keys stormed back to take a 4-2 lead in the final set, only for Stosur to stage her own comeback and snatch victory.

“That match was my first top-20 win in a couple of years and back-to-back wins on a hard court in quite a while as well in main draw,” Stosur laughed.

“I just felt my tennis was at a pretty good level but what probably won the match was my mental capabilities. Even though I was a set and 4-0 up, I don’t feel like I lost (that winning position) because I fell apart; she kind of helped me get to 4-0, and then really picked up her game.

“From a break down in the third and to play the way I did in the last four or five games is something that I’m really happy with.

“It’s a bit of a boost and kick for me going into the rest of the year and hopefully I can use that as a bit of momentum, because it’s probably the best win I’ve had in a number of years.”

Assisting that momentum is her results on the doubles court.

With Zhang, Stosur won the Australian Open – her first Grand Slam women’s doubles title since 2006 –  and then backed that up with a run to the Miami Open final.

The pair have a win-loss record in 2019 of 10-2 and are currently No.1 in the WTA Race to Shenzhen; her individual doubles ranking is currently No.17.

Stosur revealed it is a goal to qualify for the US$14 million season-ending tournament.

“It’s been exciting. I think no doubt it’s helping my tennis at the moment, playing more matches and feeling those moments in matches where there’s a lot of pressure,” Stosur said of her doubles success.

“We played four super tiebreaks in Miami and got through them all – the bigger the moment, the better we actually played.”

But before Shenzhen, and before her beloved clay-court season beginning later in April, Stosur’s attention is fixed on Australia’s Fed Cup campaign.

The team will converge on Brisbane this Sunday for a week’s training before taking on a full strength Belarusian outfit featuring Victoria Azarenka, Aryna Sabalenka and Aliaksandra Sasnovich.

“There’s going to be no easy match, I don’t think, and it may well come down to the last doubles match. And if it does, that’ll be pretty exciting.”