The highly-credentialled Australian coach will begin working with the Aussie No.3 during the clay-court season and will continue through the grass season. 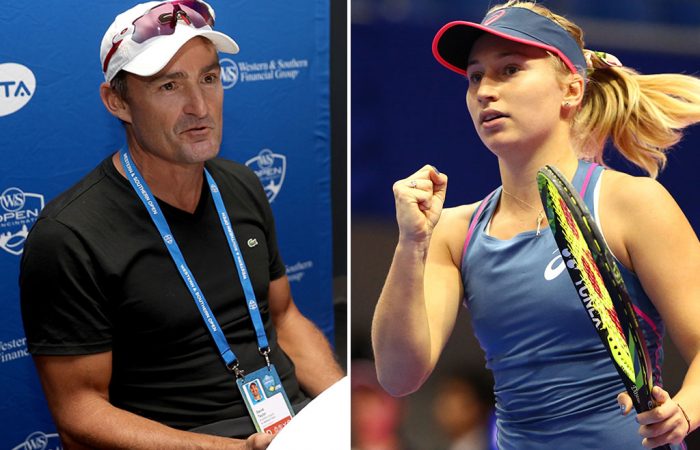 Daria Gavrilova has a new coach in David Taylor, and will begin working with her fellow Australian at her first clay-court tournament in Rabat, Morocco.

The full-time arrangement is expected to last through to the end of Wimbledon, at which point the partnership will be reviewed – and possibly extended further.

Taylor said Gavrilova – who was ranked as high as No.20 in 2017 but currently at 54th – is hoping he can assist with bringing some clarity back to her game.

“When we decided to start, she’s been very good in communication already. She’s set out goals, she wants to get a lot more defined in her playing style; looking for forehands, using her movement in an offensive way, not just a defensive way. Having clear patterns of play to build her game around,” Taylor told tennis.com.au.

“I like that, the fact she’s looking to be a lot more structured.”

Taylor has worked with several top WTA players, including former world No.1s Martina Hingis and Ana Ivanovic. Yet he is perhaps most famous for his long-term stints with Australian top-10 stars Alicia Molik and Sam Stosur, helping guide the latter to the US Open title in 2011.

More recently, he worked with international players Naomi Osaka, Jelena Ostapenko, Madison Keys and Elise Mertens, and in between stints with Stosur he also coached another Aussie in Ajla Tomljanovic.

“I think being Australian, and for so long being the Fed Cup captain and just involved in Australian tennis, even though I’ve coached outside of Australia for so long, I’ve just taken a real notice and interest (in Gavrilova),” Taylor said.

“I was very good friends with Stefano (Barsacchi) when he did quite a lot of (strength and conditioning) work with Dasha and watched a lot of matches together with him.

“Also I’ve obviously known Nicole Pratt (Gavrilova’s former coach) all my tennis life as well. So I’m definitely going into it with eyes wide open and know what Dasha is capable of.

“I think it’s gonna be a very easy start, just because I know her so well.”

Taylor said one of the first goals for Gavrilova was to get 100 per cent healthy again.

The 25-year old has been struggling with Achilles problems and plantar fasciitis, hampering the movement that is so central to her game – as well as the physical work she can do off the court to ensure her movement remains a weapon.

“She hasn’t been able to do the volume of work she used to do with (Barsacchi) when she was having a lot of success,” Taylor explained.

“Her movement lets her be a great competitor. And I think we all know Dash for her feistiness and competitiveness and not willing to lose points, and staying in points. Again that’s a lot to do with movement – this is a big part of her make-up as a player.

“So we have to get that right. And then I think she can definitely get back on track.”

After several years of coaching players hailing from other nations, Taylor revealed he was thrilled to be back in the Australian fold, coaching a local player.

“The best experiences as a coach for me have been coaching Australian players – Alicia, Sam, being Fed Cup captain. They’re actually my happiest moments in coaching,” he said.

“I’ve always wanted to look for the opportunity to come back, and I’m very happy it’s come along. I definitely like their mindset.

“I think Tennis Australia’s a real positive environment to be in at the moment. Look at the Australian Open, and look how well we’re doing in men’s and women’s tennis.

“It’s been a long time coming, but it’s a good time to get back in.”