With a new-look team and more players vying for selection, Australia coach Nicole Pratt is filled with optimism ahead of April’s Fed Cup semifinal against Belarus. 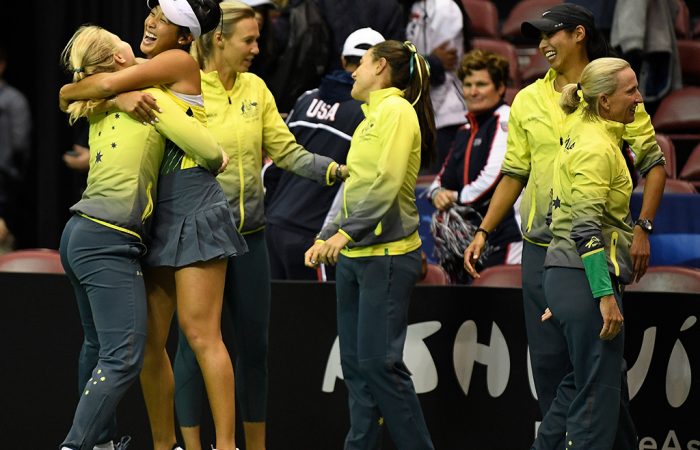 It was a youthful team that upstaged the United States in the first round of the Fed Cup World Group last month, and Australia’s emerging players are vying for the chance to replicate that performance when Belarus are the visitors for April’s semifinals.

Team captain Alicia Molik and coach Nicole Pratt faced a selection dilemma when choosing the five-player squad to take on the US in North Carolina, and then which players to put on the court for singles and doubles duty.

Yet being spoiled for choice is a nice problem to have and, according to Pratt, this stems from the fact that Australia’s female tennis stocks are the deepest they have been in almost two decades.

“The point that comes to my mind was around the time when we had Jelena (Dokic), Alicia (Molik), and then Sam (Stosur). They were the three young players, and there was myself, Rachel McQuillan, Rennae Stubbs,” said Pratt, referring to Fed Cup ties in the years 2000 and 2001.

“That was the point in time that came back to me – all of a sudden you had these three young players vying for Fed Cup spots. It’s very similar to that. Probably it’s even more exciting to think who is under the three players we chose as well.”

Australia fielded something of a new-look team for that February tie in Asheville; into the fold came debutantes Priscilla Hon and Astra Sharma, as well as Kimberly Birrell, who had only played in one previous tie.

They joined Ash Barty and Daria Gavrilova, meaning no player in the team was older than 24 years of age.

“We always had it in our mind that Astra Sharma was going to be going as ‘orange girl’, but the fact she stepped up and had a great summer, she really became a viable option for either singles or doubles. Kim had a breakout summer, and Pri had been consistent all year with good results in singles and doubles,” Pratt explained.

“We just thought, ‘let’s throw them all in there and see who steps up during the week. And we’ll decide our final team selection from there.’

“This has been building for a while. As in, we knew these players were coming through.”

The talent and depth in the ranks does not stop there.

Never far from the minds of Pratt and Molik during the team selection process were other rising stars like Destanee Aiava, Lizette Cabrera, Jaimee Fourlis, Ellen Perez and Zoe Hives.

And, results pending, they are all expected to be in the conversation when it comes to selecting the squad to play Belarus on 20-21 April, with a spot in the Fed Cup final on the line.

“We’re constantly looking at results. Part of our decision-making with the Fed Cup competition is, who’s in form?” Pratt said.

“That was the beauty of the summer – we could actually choose players who we felt were in form. So we’ll be looking out for results over the next month, month-and-a-half.

“Obviously (we have) our well-established players like Ash and Dash, and Sam hasn’t excluded playing the next Fed Cup tie; certainly she’ll be another consideration for us. But even if Sam gets selected, there’s still probably another two spots again for this young group of players to stick their hand up.”

Having gone with a five-player squad for the United States tie, Pratt said it was likely she and Molik would adopt the same approach for the semifinal, because it provides more options.

And that extends to the doubles, always the fifth rubber in Fed Cup and, when live, the decisive final match that determines the winners of a tie.

“We’re missing someone like Casey Dellacqua. We have options to go to, but no-one who’s the go-to automatically. At the moment we’re working through that,” Pratt said.

“[WTA top-80 players Monique Adamczak and Jess Moore] are certainly a consideration. We would love to have a doubles combo.

“Ash is phenomenal at doubles; there’s a dynamic there with choosing the right personality (in a partner).

“It’s exciting. There’s so much to choose from.”