Ash Barty and debutante Priscilla Hon combine in the doubles to seal a thrilling victory for Australia over the United States in the Fed Cup World Group. 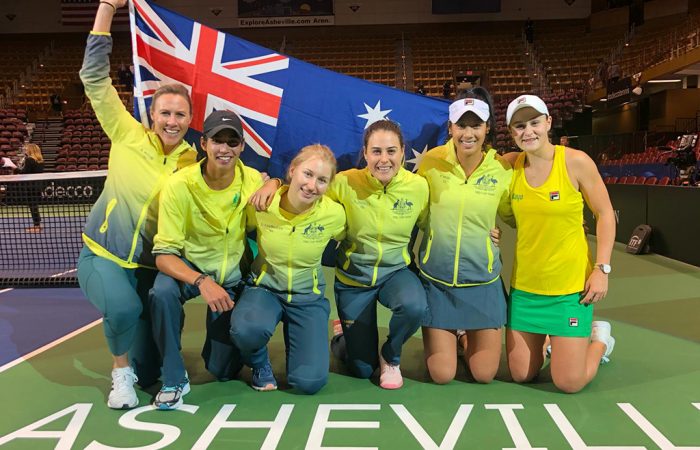 Australia has defeated the US in the Fed Cup with Ash Barty and Priscilla Hon combining for a tense doubles victory to seal the World Group tie in Asheville, North Carolina.

Barty and Hon beat Nicole Melichar and Danielle Collins 6-4 7-5 on Sunday to clinch the tie 3-2 and set up a semifinal clash with Belarus in April, a tie which will be staged in Australia.

It is the first time since 2014 Australia has made the semifinals.

🇦🇺 Australia have done it!

The Aussies beat USA 64 75 in the fifth rubber to move on to the World Group semifinals where they'll host Belarus#FedCup #USAAUS pic.twitter.com/JWqIMRMGo3

It was an especially happy day for Barty, who earlier brushed Madison Keys aside in straight sets to put the visitors ahead 2-1.

Danielle Collins then beat Daria Gavrilova in three sets to lock scores at 2-2 and send the tie to a decisive doubles rubber.

Australian captain Alicia Molik opted to pair Barty with Hon, and the two Queenslanders delivered, with Hon serving out the match at love in an impressive performance on debut.

“It’s definitely up there (in terms of career accomplishments). I mean, this is my dream come true – I’ve always wanted to play for Australia,” Hon said.

“And beside Ash, I’ve always looked up to her my whole life so she’s helping me out. We definitely got the W because of her (laughter).”

Added Barty: “I’m so proud of Pri and my team and Mol (Alicia Molik) for believing in us. We’ve had a hell of a weekend and there’s absolutely nothing better than coming out and playing a live tie for you country.

“For Pri to play the way that she did today, I’m just so proud of her.”

The opening stages of the first set featured a succession of closely-fought games, but the Aussies broke the match open when they broke in the fifth game and held a pair of break points for a 5-2, double-break lead.

Although they didn’t convert that, they remained a break ahead and closed out the opening set when Hon swatted away an overhead for a winner.

Cheered on by a vocal home crowd, Collins and Melichar broke back, with Collins in particular proving effective with her power and aggression on returns.

It looked as if the Americans would assume control of the second set when they held points for a 4-2 lead, yet thanks to Barty’s serving prowess and Hon’s instincts at net, the Aussies erased three break points to level scores at 3-3.

The teams then traded breaks before Barty and Hon snared another break for a 6-5 lead.

Having been somewhat vulnerable on serve earlier in the match, Hon stepped up to the line to serve for victory and showed notable composure, slotting an ace to reach 40-0 and three match points, and converting when Collins’ return found the net.

"There's absolutely nothing better than coming out and playing a live tie for your country."

“It’s been an amazing week … it’s probably one of my best-ever Fed Cups,” Molik said.

“Really proud of Pri; most of us have to work years to play in a live tie. She got that opportunity today in her first Fed Cup tie and she grabbed it with both arms.

“The ship was steered by Ash and Pri held (up) her end of the bargain. It’s just an amazing feeling, the whole week, between our players, our staff, we couldn’t ask for more.”