Australia to face Belgium and Colombia in Davis Cup

Australia has been drawn with Belgium and Colombia in the group stage of the new Davis Cup Finals tournament in November. 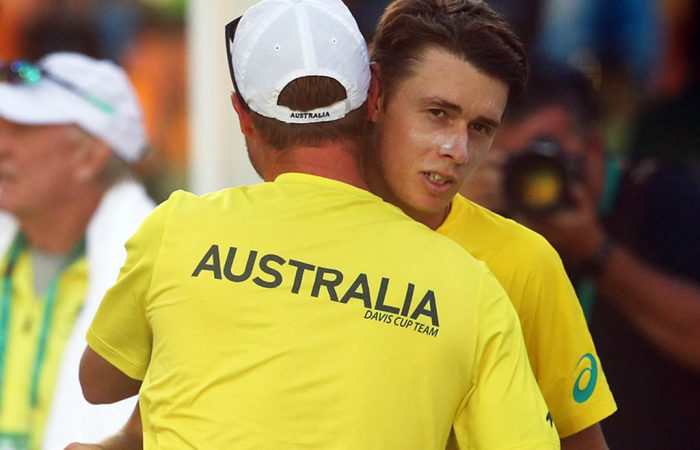 Australia will face Belgium and Colombia in the group stage of the new Davis Cup Finals tournament in November.

Eighteen nations will compete in Madrid from 18-24 November, with six groups of three leading to quarterfinals, semifinals and the final.

At Thursday’s draw in Madrid, Australia was placed in Group D along with three-time finalists Belgium and World Group debutants Colombia.

Six group winners plus the two second-placed teams with the best records will progress to the knockout stages.

The four semifinalists will guarantee themselves a place in the 2020 Finals, while the two teams with the worst record after the group stage will be relegated to the Zone Group competition the following year.

The 12 teams that finish between fifth and 16th will compete in the Davis Cup qualifiers in February 2020.

Australia qualified for the Finals by beating Bosnia & Herzegovina in the qualifying round in Adelaide last month.

Speaking after that tie, Australia captain Lleyton Hewitt said: “The end of the year is a tough time for a lot of guys because they get worn out.

“It’s about managing guys’ bodies but also mentally being ready to play an event for your country at the end of the year and trying to peak for that.

“That’s probably something for me and the support staff more to deal with and come up with ideas to try and get the guys motivated as much as possible to go out there and perform to their best.”

Australia has a 2-3 record against Belgium, having lost the the last three ties including the 2017 semifinal, and they will face Colombia for the first time.