After a third-round appearance at the Australian Open and a week at home to recharge, Kimberly Birrell records a victory in the Launceston opening round. 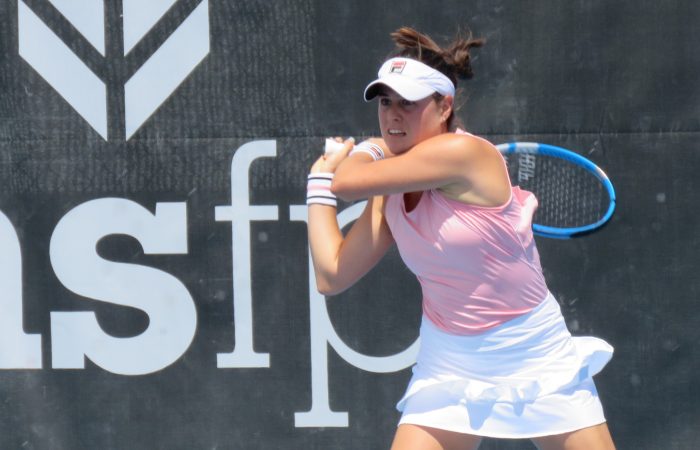 Kimberly Birrell has escaped an early scare to prevail in a tight three-set tussle against Ekaterine Gorgodze of Georgia on Wednesday to move into the second round of the Neville-Smith Forest Products Launceston International.

Birrell, who recently reached the third round of the Australian Open as a wildcard, lost the first set in just 30 minutes before regaining her recent form to take the match 2-6 6-3 6-3.

“I found my rhythm towards the end of the first set and managed to carry that on,” she said. “It was good to just get through that first one and get used to the conditions here.”

The 20-year-old, who has surged to world No.157 after her recent success, said she spent a week at home in Queensland to reset before heading to Launceston. “That was really good,” she said. “I’m definitely aware that not every week is like a Grand Slam and I needed to get in the right mindset to start playing again.”

With recent wins over the likes of Croatian world No.29 Donna Vekic (Melbourne), world No.43 Kristina Mladenovic of France (Sydney) and her maiden top-ten victory over Russian Daria Kasatkina in Brisbane – all in three sets – Birrell is quickly learning what it takes to compete at the highest level.

“I’ve had some really tough matches over the last couple of weeks so I definitely have the confidence to know that I can last the distance against anyone,” she said.

“I have found some belief. I’ve had some really good experiences and got some good wins under my belt. I still know that every match is going to be tough but I just feel now like every time I walk out on the court and play well that I can compete against the best in the world.”

Last week’s maiden titlist in Burnie, Belinda Woolcock, fell to Bulgaria’s Viktoriya Tomova in three sets, while Zoe Hives was unlucky not to find a way past Japanese second seed Nao Hibino, bowing out in a deciding set tiebreaker.