Top seed Alex Bolt was a four-set winner over Akira Santillan on Wednesday to reach the last four of the AO Play-off, while Maverick Banes upset second seed John-Patrick Smith in five sets. 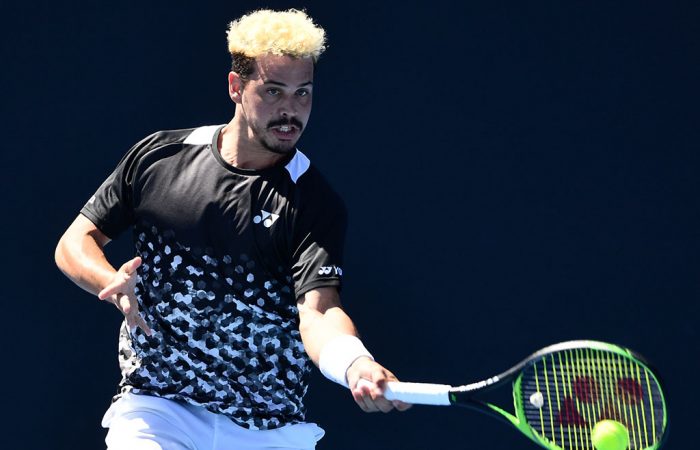 Alex Bolt advanced to the semifinals of the Australian Open Play-off for the second straight year after a four-set win over Akira Santillan.

Banes will next meet James Duckworth for a place in the Play-off final, while Bolt faces Luke Saville, who won his quarterfinal against Dayne Kelly in four sets.

"Both my parents were tennis coaches so I couldn't really get away from the court. Always loved it, I played heaps when I was young. Did a bit of work with my dad until I was probably 13, 14 years old. I enjoyed all sports as most young guys do, I just kind of had a bit more success in tennis. I train up at Tennyson every day at the Queensland Tennis Centre. I'm taking each year as it comes. I've found I'm enjoying it a lot more the last couple of years. The actual travel itself, I don't enjoy any more, but this year in particular I've tried to match my schedule up with other Aussie guys so I've always got someone to travel with. That's kind of kept me a bit more sane on the road. In previous years, I've spent quite a few weeks on my own. I'm kind of enjoying the tour now there's a few different faces up there apart from the same top guys; It’s good to see younger guys up there who I've had a little bit to do with growing up as well.” Maverick Banes, 26, QLD. #decembershowdown #AOPlayoff

Duckworth beat 17-year-old wildcard Rinky Hijikata in four sets, and showed off his full arsenal in the final game – he closed out the final three points with a drop-shot winner, a perfectly-weighted lob and an unanswerable backhand.

The result ended Hijikata’s seven-match winning streak; he came into the Play-off having won the 18/u Australian title.

Bolt, the world No.159, missed an off-forehand off a short ball on the second of his set points, allowing Santillan to level the tiebreak at 6-6.

“I don’t really know (how I turned it around in the third and fourth sets),” Bolt told tennis.com.au.

“I was frustrated that I didn’t convert the two set points … I sort of let all my frustration out in destroying a racquet and just trying to let that go and try and regroup. Fortunately today it sort of turned out the right way.

“I got on him early in the third set – broke him first game – and then I sort of got onto a roll. And then, yeah, didn’t look back.”

Santillan required a medical time out for a shoulder complaint in the fourth set.

“That sort of stopped my momentum a little bit,” Bolt confessed, “but I tried not to let that affect me and I felt like I controlled (the situation) pretty well.”

Bolt arrived at the Play-off this week with confidence from some strong recent performances on the ATP Challenger circuit.

In October, the South Australian lefty advanced to the final of the Fairfield Challenger in California before backing that up with a run to the semifinals of the Traralgon Challenger.

“Towards the end of the season I was playing some really good tennis and I sort of brought that through into my training block and I’ve been training hard, and yeah, I guess I’ve continued that form into the Play-off,” said Bolt, who reached the final at last year’s event before losing to Alex De Minaur.

“I’ve had two pretty tough matches (so far this week) even though the scorelines have been pretty comfortably my way. I felt today I played a bit better than I did on Monday, and hopefully I can continue that onto Friday.”

The South Australian, ranked as high as No.152 in 2015 but who is now just inside the top 500, feels he is finally beginning to make his way back after a couple of “rocky” years.

“The legs are definitely feeling it but I’ve put in some good work this off-season and I’m ready for a couple more matches hopefully,” Saville said.

“I’m happy with my game, and I’m really starting to chip away and I feel like the serve’s starting to come back … sort of finding my grip back a little bit. Starting to win some of those closer matches which I’ve probably been losing (previously).

“(The tournament) is pretty open, from the start of the week when I looked at it, and I’m not surprised (I’m at this point) – I’m happy with my form coming in. I don’t really want to stop there.”

Bolt, the top seed, will present a tough challenge. Saville is keenly aware of his good friend’s capabilities.

“He’s had a great year; he’s got the ability to be top 100 no doubt. So it’s gonna be tough. We’ve played each other heaps – it’s gone either way. He’s gonna be tough over five sets, got a great serve, great forehand,” Saville said.

“It’s really just a war out there. Just a massive battle. Five sets is a different ball game. But I’m gonna go out there, bring my game, fight to the last point and see what happens.”