Week one of the December Showdown has come to a close, with the 18/u Australian Champions being crowned at Melbourne Park today. 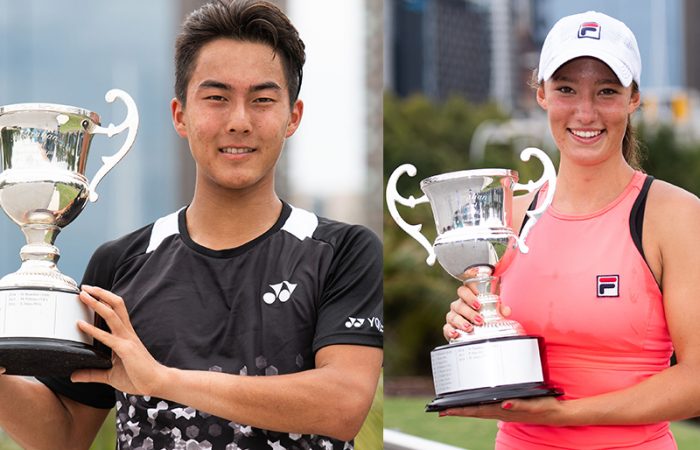 National champions crowned after week one of December Showdown

Week one of the December Showdown has come to a close, with Gabriella Da Silva-Fick (NSW) and Rinky Hijikata (NSW) winning the 18/u girls’ and boys’ titles and Talia Gibson (WA) and Derek Pham (WA) the new 14/u national champions.

More than 400 of Australia’s best junior tennis players are in Melbourne this month battling it out for national titles in the 12/u, 14/u, 16/u and 18/u age championships at the annual event.

The win gives Da Silva-Fick the opportunity to play off for an Australian Open main draw wildcard at the 2019 Play-off, running from 10-16 December.

Australian Open wildcards up for grabs at Play-off

“It feel amazing, to be honest I did not expect this as I really struggled with my form to begin with, but I was able to play some of my best tennis in my semi and in the final so feeling pretty happy right now,” Da Silva-Fick said after the match.

“I was really focused, taking it one point at a time, very zoned in, and not really focusing on the score, just digging out every point which added up, and before I knew it, it was match point.

“It’s such an important week for tennis in Australia, there’s some amazing players like Ash Barty who have won the 18s title so to play my best tennis and come out with is really motivating for next year, it means everything.”

After skyrocketing up the junior rankings to No.15 in world juniors, Hijikata played all four junior Grand Slams in 2018, solidifying his position on the junior world circuit. This win earns Hijikata a wildcard into the East Hotel Canberra Challenger in January, and he will also take part in the Men’s AO Play-off next week after receiving a wildcard into the field.

“It feels really good to get the win, I’m pretty happy with my performance this week, I had a bit of pressure on myself so I’m just really happy to come away with the win,” Hijikata said after the match.

“He’s (Alex) someone that I think everyone can look up too, the way he goes about his game and how quickly he’s risen up the ranks is pretty surreal and something not many people can do and it’s just a credit to his work ethic and something I’ll try and implement into my own training program and matches. Hopefully in a couple of years I’ll be out there playing alongside him.

“I think December Showdown is just a great event, it’s not often you have so many Aussie players in one place at one event, there’s a lot of different people to look up to and great camaraderie between everyone… it’s just really good to see where the level of Australian tennis is and be able to benchmark yourself against your peers, it’s really special.

De Minaur was in the stands supporting the 18s boys’ final, “It’s great to see Rinky playing the way he is, he’s made an unbelievable leap the last year, he’s very professional and you can see the results. It’s great to see a fellow ‘blue wall’ (NSW) member come out and play some great tennis and I’m really looking forward to seeing what he can do in the Play-off next week,” he said.

“It’s great to come back here (to December Showdown) and watch the younger players coming up, because I was on the same road a few years ago and know what that’s like.”

The wins for Hijikata and Da Silva-Fick puts them amongst the ranks of Nick Kyrgios, Ash Barty and Jason Kubler who have all previously claimed the December Showdown 18s championships.

Earlier in the week, the 14s championships were won by Western Australian duo Talia Gibson in the and Derek Pham.

The Australian Open 2019 Play-off, 16/u and 12/u championships will be played next week as part of the December Showdown.

December Showdown is Australia’s biggest junior tennis event series and runs from Saturday 1 to Sunday 16 December at the home of the Australian Open.

For all December Showdown news, draws and order of play please visit here.

Live scores will be available here or download the Tennis Ticker app.

The Australian Open 2019 Play-off will be livestreamed via tennis.com.au from 10 to 16 December and Nine’s 9Now will stream the semifinals and finals.

Entry to December Showdown is free for spectators.