After missing Traralgon due to injury, Victorian Andrew Harris is back in action at the ATP Challenger in Canberra while top seed Jason Kubler is forced to withdraw. 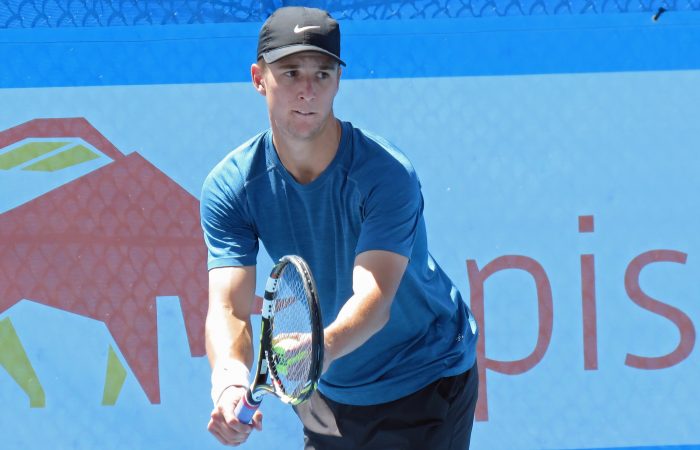 Andrew Harris arrived in Canberra on the comeback trail from injury –  yet again – as he prepares to battle South Australian Bradley Mousley on Tuesday in the Apis Canberra International.

The injury-plagued Victorian said he hasn’t had great preparation. “I’m coming off an adductor strain, so I had to pull out of Traralgon last week. I just started hitting a few days ago but I’ll give it my best.”

“I still have high expectations for myself, I can’t help that,” he added. “I’ll just go for it, and we’ll see what happens.”

Harris’ last tournament in Canberra (January) was his first on the professional circuit since being sidelined for ten months with a knee injury.

“My body has definitely let me down many times so I’m used to playing matches and tournaments with limited preparation,” he said. “That’s just how it goes and you do the best you can.”

“From February I missed about four months with a bone stress injury in my arm. Then I got a few niggles later in the year, nothing crazy, just little ones here and there.

“I want to finish strong but I also want to stay healthy and get the body right for a good start to next year. There’ll be plenty of opportunities, I’ve just got to play well and put myself in the best position for that.”

Harris looks at the crop of Australians coming through the ranks like Alex Bolt, Marc Polmans and Alexei Popyrin – all making inroads towards the top 100. “It spurs you on, it gives you confidence that if they’re doing it then you can give it a bit of push as well,” he said. “We’re all at similar levels. Once you get a bit of confidence going you can just roll on.”

Meanwhile, injury has also struck the top seed in Canberra, with Jason Kubler forced to withdraw due to patellar tendinitis ahead of his first-round match with fellow Queenslander Maverick Banes. He will be replaced in the draw by lucky loser Tung-Lin Wu of Taipei.

In first round action on Monday, Victorian Jacob Grills had a big win over Hiroki Moriya, recovering to take down the Japanese 4-6 6-4 6-1. Qualifier Thomas Fancutt was not so fortunate, falling to Franchman Sadio Doumbia after taking the first set, 4-6 6-4 6-2.

Some enthralling first round all-Aussie encounters are set for Tuesday including Traralgon winner Jordan Thompson (No.3) against Jeremy Beale; Marc Polmans (No.5) versus James Duckworth and Max Purcell opposing Alex Bolt (No.4).