Thompson through to Traralgon final 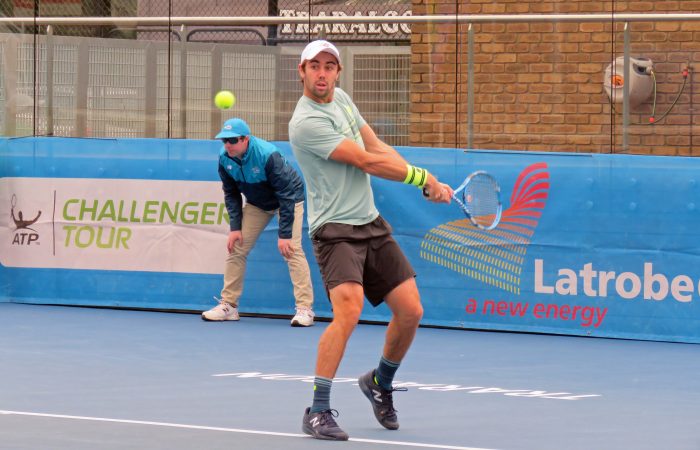 Jordan Thompson is into the 2018 Latrobe City Traralgon ATP Challenger final after finding a way past Victorian Marc Polmans in the extremely blustery conditions that faced the players on Saturday.

“It was good to come away with a win, it was very tough out there,” Thompson said after the 6-0 4-6 6-0 victory in the pair’s first meeting on the ATP Tour. “Interesting match and I’m just happy to get through it.

“The ball was moving around everywhere. I did well just to keep it together and push through.

“It turned into a battle (in the second set) and I just had to go back to what was working earlier. Credit to him, he played really well, he stuck around and made it difficult.”

Despite the loss, Polmans, 21, enjoyed a solid run in Traralgon and continues to finish the year strongly. He will enter the ATP Challenger in Canberra next week with a new career-high ranking inside the world’s top 140.

Thompson has now reached his seventh ATP Challenger final this year, with the opportunity to earn his second title. Standing in the way will be second seed Yoshihito Nishioka of Japan, a man Thompson is yet to beat in their three previous meetings.

“He’s a very good player,” Thompson, 24, said of his younger opponent, the world No.98. “He’s had injury and now he’s come back even stronger.

“He’s been to Australia a few times now so it’s nothing new for him.”

Nishioka booked his place in the final after a hard-fought battle with last year’s finalist and fourth seed Alex Bolt. The Japanese proved too consistent in the end, outlasting the South Australian to claim the match 7-5 6-4.

Earlier in the week, top seed and returning champion Jason Kubler was bundled out in the second round, the Queenslander going down to British qualifier Brydan Klein in three sets. Klein, in turn, was beaten by Polmans in their quarterfinal clash on Thursday.