After a run to the final in Calgary, Jordan Thompson opens his Traralgon campaign with a win on Wednesday while top seed Jason Kubler is bundled out. 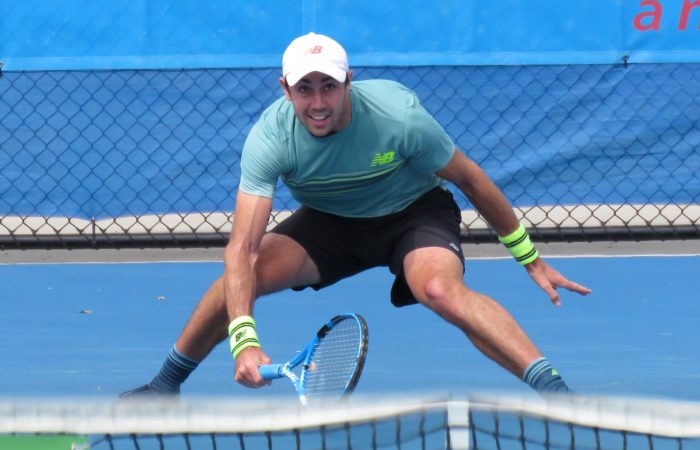 Fresh from an ATP Challenger final in Calgary, Jordan Thompson made short work of his first-round opponent at the Latrobe City Traralgon ATP Challenger on Tuesday, defeating Italy’s Alessandro Petrone in under an hour.

“It’s good to be back in Australia and start with a win,” Thompson, 24, said. “It felt better than expected after getting off the plane. It was a little bit of a tussle at the start but I got through it pretty convincingly.”

Competing in his sixth ATP Challenger final this year – one win and five losses – in Calgary on the weekend, Thompson went down to Ivo Karlovic, who became the oldest ATP Challenger champion at the age of 39 years and seven months.

“I don’t know if I really wanted to give him that honour!” Thompson laughed. “We’ve played before but never indoors and in a little bit of altitude so that definitely made his serve a fair better. It was going through the air pretty fast.

“Another final. I couldn’t get through it which was a little bit disappointing.”

After coming off career-best years in 2016/17 that saw him rise to world No.63, the Sydney-sider has had an indifferent season by his own admission, slipping outside the top 100 (currently No.101) and including two five-set first-round losses at Melbourne Park and Roland Garros.

On both occasions he fought back from two sets down only to relinquish the decider.

“At ATP Tour level, it’s been disappointing for me, but when I’ve gone back to Challengers I’ve had fairly consistent results. Hopefully I can finish the year strong and give myself another chance at Tour level next year.”

Thompson will next face British lucky loser Evan Hoyt, who has already shown some solid form on the 2018 Australian Pro Tour thus far.

Elsewhere, top seed and defending champion Jason Kubler was eliminated from the tournament in the second round by another Brit, qualifier Brydan Klein, who prevailed 6-4 6-7(3) 6-3. Kubler held an early break in the final set but was unable to hold on. Klein will meet fifth seed Marc Polmans in Friday’s quarterfinals, the Victorian defeating Queenslander Maverick Banes 6-3 5-7 6-3.

Both Bolt and Polmans have recently reached career-high world rankings of No.140 and No.145 respectively and appear in fine touch.

Wildcard Aleksandar Vukic and Akira Santillan will each be vying for a quarterfinal berth in Thursday’s action.