‘He kept persisting, trying’ – Rafter and Woodbridge on Millman 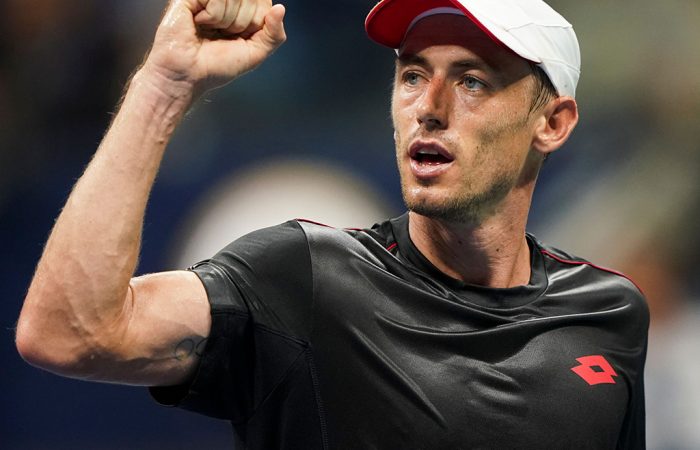 Millman beat 20-time Grand Slam champion Federer in four sets on Monday to cause a huge upset, and set up a quarterfinal against Wimbledon champion Novak Djokovic.

Tributes have come from across the tennis world and beyond for the 29-year-old, including from fellow Queenslander Rafter.

“What I like most about John’s win is that he kept persisting and trying his hardest every single day of his tennis career to be in the position he was in, and to win…well that is reward for his effort,” said the two-times US Open singles champion.

“Nothing gives me more pleasure than watching the path of an athlete who tries his hardest to be the best he can.”

After stunning the tennis world and defeating Roger Federer at the US Open John Millman's mum is keeping him grounded. "His head was a bit of a cabbage before he started the US." #9Today pic.twitter.com/i3zS52roks

Millman was ranked No.235 in the world 12 months ago after a succession of injury problems, but is now projected to break into the top 40 for the first time after an impressive year to date.

“It takes a long time to really believe you deserve to be on that court. There was a great quote when he said, ‘I don’t play the reputation,’ but you still do.

“There is still an aura, that expectation around a big match, but you can handle it when you put yourself in that position often enough.

“In my opinion, he will feel he’s playing the greatest tennis of his life, the ball will be coming out of the centre of the racquet like it’s never done before, and you’ve just got to hang on and run with it while you have that.”

Millman has featured on back and front pages of newspapers across the world in the last 24 hours, while his family and former coaches have been interviewed on television.

Meanwhile, Millman only made it to bed in the early hours following his epic win over Federer and finds himself in the unfamiliar position of being of centre of attention in the build-up to his next match.

“He’s 29 and pretty good at handling himself in front of the media,” said Woodbridge. “He’s done a bit of commentary and that helps, sitting on the other side and knowing what’s expected of you.

A night to remember forever. Well played @johnhmillman. An amazing and inspirational journey that led to this moment. #moretocome 💪 pic.twitter.com/dSIoT6MyEn

“He’s a mature tennis player who can handle this situation really well. I don’t think it’s going to change him, I just think he’s going to really be enjoying it.

“The reality is he has that match to live on for the rest of his tennis career and beyond. These matches are incredibly special to a player like John, because it gives you kudos for the rest of your days.”

Millman next faces another of the game’s legends in 13-time Grand Slam champion Djokovic, a one-sided winner in their only previous meeting on the Queen’s Club grass three months ago.

“The difficulty in backing it up is John is literally playing a mirror image of himself, but a better one,” added Woodbridge.

“So how is he going to beat Novak? The one thing that really stands out for me is he has to keep Novak out there for as long as he can. And he has to make it a war of attrition and beat him.

“He doesn’t have a big enough game to hit through Novak, so he has to stay there for as long as possible and find a way to break him physically.”