From players to politicians, fans to media - John Millman's stunning win over Roger Federer sparked reaction from the tennis world and beyond. 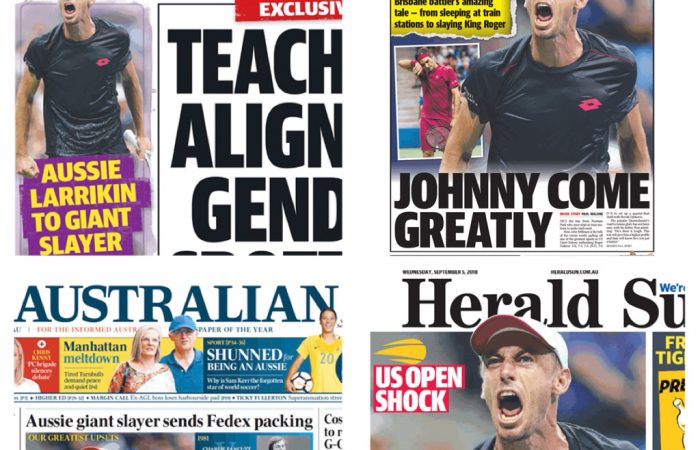 John Millman not only achieved a personal milestone when he beat Roger Federer at the US Open on Monday, he thrilled tennis fans across Australia and beyond.

The 29-year-old caused one of the biggest upsets in tennis history by knocking out the 20-time Grand Slam champion in four sets.

And the outpouring of excitement has been match by affection for a player who has battled through injuries that almost made him give up the game.

“We hardly ever see him in the paper, let alone the television,” said a proud Ron Millman as he and wife Shona were interviewed about their son.

“He’ll do us proud whatever he does!” John Millman’s amazing parents Ron & Shona reveal what they were up to during the match, what we need to know about their son and if they’re now off to the #USOpen! #TheProjectTV pic.twitter.com/At3gHinplb

Well, there has been no shortage of coverage across newspapers, television and social media in the hours since the world No.55 became the number one story in sport.

Even Australia’s new Prime Minister has been captivated by the country’s newest star.

“Seeing John do that is just so exciting,” he told Nine’s Today show.

“I was getting texts through the game from colleagues and friends saying how he was going. We posted something last night wishing him the best. These things make Australians feel great and he is a true hero.”

From his on-court interview with ESPN’s Brad Gilbert, when he smilingly paid tribute to the American’s book as an inspiration, to the subsequent press conference where he insisted that his “hero” Federer had been below his best, Millman was happy to share the spotlight every step of the way.

There was only one man the Australian papers were focused on, however – “Giant slayer”, “Millman delivers”, “Johnny Come Greatly”, were just some of the headlines – while tributes flowed on social media:

Asked the @usopen locker attendants who their favorite player was in ‘17 (expected all to say Federer)…three kids simultaneously said, “Millman, by far.”

what a pleasure to interview John after his amazing 😉 victory over RF2.0

A night to remember forever. Well played @johnhmillman. An amazing and inspirational journey that led to this moment. #moretocome 💪 pic.twitter.com/dSIoT6MyEn

John Millman is a class act. In the biggest moment of his tennis career he is respectful to Roger Federer and humble in victory. That's how you do it.

Congrats to John Millman for creating one of the greatest upsets in tennis history by beating Roger Federer. One of the hardest working pros out there & a reallly decent guy.Sometimes we get results we never see coming but belief,persistence, desire go a long way.

This is the most classic Aussie reaction ever. Modest, humble. Respectful of his legendary opponent. Just a quick, satisfied, appreciative glance at his team. What a moment for John Millman. https://t.co/VRkRl3gemi

If you’re a Federer fan who is upset:

Be happy for Millman who has spent his entire life fighting physically, mentally and financially to achieve what Federer has achieved many, many times. Federer has a lifetime of memories. Now Millman can put one on the board for himself.