Millman ready for Djokovic at US Open

John Millman has overcome injury and played in remote locations yet now finds himself up against Novak Djokovic on the world's biggest court in his first Grand Slam quarterfinal. 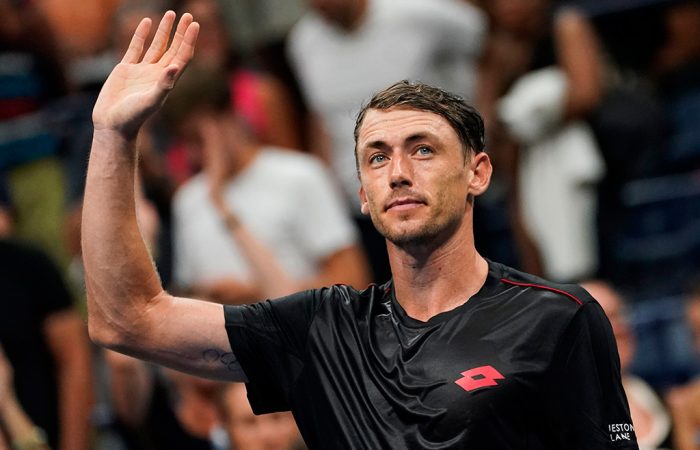 John Millman is vowing to take the fight to Novak Djokovic, knowing he can’t die wondering if he is to have any hope of continuing his captivating US Open run in New York.

The Australian underdog’s quarterfinal with the 13-time Grand Slam champion has been scheduled as the second feature night match at Arthur Ashe Stadium on Wednesday, starting approximately 11am AEST.

The tennis world will be watching as Millman attempts to add Djokovic’s scalp to that of Roger Federer’s after the unfancied world No.55 shattered the Swiss superstar’s 40-from-40 record against non-top 50 opponents at Flushing Meadows.

“Again, it might sound a bit boring but I’ve got to control my side of the court,” Millman told AAP after a hearty practice session in more suffocating humidity that forced the extreme heat rule to be imposed again on Tuesday.

“I’ve got to be really tight with my unforced errors, take my chances and take it to him a little bit. Anything that drops short, I’ve got to try to take advantage of it.

“I’m under no illusions that I’m going to have to have one of my very best days to get the job done.”

Millman was the lowest-ranked of the tournament’s eight quarterfinalists, an impressive group also featuring Juan Martin del Potro (who got past John Isner on Tuesday), Rafael Nadal, Dominic Thiem, Marin Cilic and Kei Nishikori – all current or former top-five players.

It’s an incredible achievement considering his gruelling, injury-ravaged path to this point.

“It’s been a long journey,” Millman told AAP, reflecting on a tumultuous career that took him to tennis hell and back.

“Pitesti in Romania I really struggled with,” he said. “I drove for ages through cane fields. I thought I was going to get mugged or something. It was really dodgy.”

He also underwent three surgeries – two on his shoulder, one on his groin – after which his ranking plummeted each time. This time last year, he was ranked No.235 as he made his way back from the groin injury that kept him off tour for the first five months of the 2017 season.

With no promises, only doubts, Millman feared he’d never make it back on tour, let alone scale such heights as Monday night’s glorious triumph over Federer at Arthur Ashe Stadium.

As insurance, he completed a university degree and worked a day day job in finance to pay the bills.

“It hasn’t come too easy for me and it’s very cliche but this is why you play: to be competing at these famous tournaments,” the Queenslander said.

“I’ve done the hard yards through the Futures tours, through the Challenger tours. It took me a long time and I’m sure there were times during those tournaments where I questioned whether I really wanted it.

“But it makes you really appreciate these moments even more.”

“My phone’s been going off non-stop,” he said.