John Millman beat Jan-Lennard Struff in his first-round match in Hamburg while fellow Aussies Thanasi Kokkinakis and James Duckworth fell in the opening round in Atlanta. 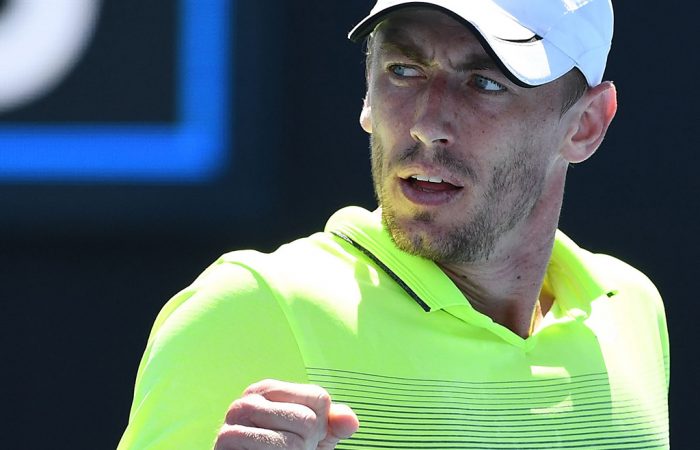 REUTERS – John Millman beat German Jan-Lennard Struff in straight sets at the German Open to set up a tricky second round clash with world No.8 Dominic Thiem.

The Australian saved three break points to overcome Struff 7-5 6-3 in one hour and 31 minutes on clay at Hamburg’s Am Rothenbaum.

Meanwhile, Thiem marked his return from an injury layoff with a 6-4 6-2 victory over qualifier Corentin Moutet.

The French open runner-up’s Wimbledon adventure was cut short earlier this month after he was forced to retire with a back injury in his opening-round match against Marcos Baghdatis.

Chasing his third hard court title of the season, the Austrian looked in fine form against Moutet as he claimed a decisive break in the seventh game to win the opening set.

Frenchman Moutet, ranked 119th in the world, threatened a comeback when he secured an early break in the second set but Thiem reeled off six consecutive games to seal victory.

AP – Thanasi Kokkinakis and James Duckworth were knocked out of the ATP Tour Atlanta Open after first-round defeats on Tuesday.

Kokkinakis was beaten 6-3 6-4 by fellow qualifier Noah Rubin, with a break in each set enough for the American to claim the 84-minute win.

The American world No.164 will face Australian second seed Nick Kyrgios in the next round.

Duckworth pushed Ryan Harrison to three sets but was no match in the decider going down 4-6 7-6(2) 6-1 to the American eighth seed.