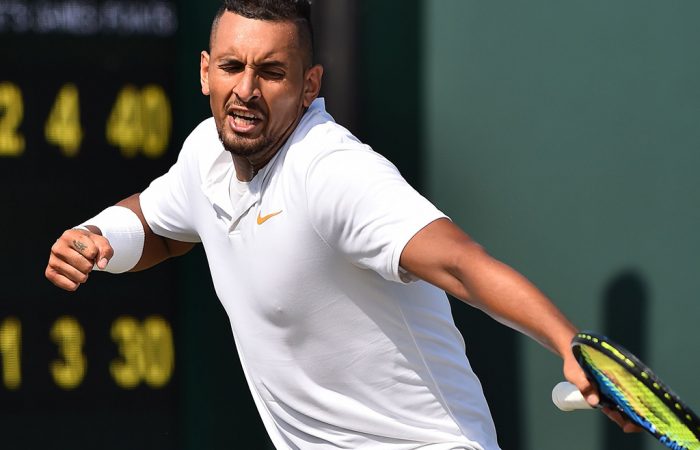 Nick Kyrgios moved through to the second round at Wimbledon for the fourth time with a hard-fought win over Uzbekistan’s Denis Istomin.

REPORT: Barty, Stosur and Gavrilova through

In a battle of big servers on Court 12, Kyrgios and Istomin were practically inseparable; the first three sets were decided by tiebreaks.

Yet in the eighth game of the fourth, Kyrgios made his move, scoring the one and only break of the match for a 5-3 lead.

"How did you make that?"

Even @NickKyrgios couldn't believe this from Denis Istomin 😮#Wimbledon pic.twitter.com/V5qPnzsMPJ

In the second round Kyrgios takes on Dutchman Robin Haase, who got past Marius Copil of Romania.

“Very tough match. I didn’t play anywhere near my best tennis today. I served well. But I struggled to find rhythm,” Kyrgios said.  “I was expecting it to be tough from the start. I knew he was going to come out pretty confident. I thought he played well.

“(But) I’m just in a lot better place than I was last year. I came into Wimbledon last year injured, pretty bad mental state. I was out of the game for two and a half months. So coming back, I’ve been excited. I’ve been winning a lot of matches, playing on grass.

“I guess I’m in kind of like a happy place. I feel like I’m playing well. I mean, I have a different approach. I feel like I’m one of the guys that can cause a bit of an uproar at this event. We’ll see how it goes.”

Ebden in the zone

Prior to the tournament, Ebden was brimming with confidence.

He referenced the tight match he’d played against Goffin last year in Tokyo – which the Belgian won in a third-set tiebreak – and declared: “I could find myself in 13 days’ time in the quarters or semis.”

The 30-year-old took the first step on that path with a commanding 6-4 6-3 6-4 win over the world No.9 on Court 3, the latest victory in a stellar grass-court season during which he has won 11 of his 14 matches.

In just 59 minutes Ebden already had the first two sets in the bag and he raced through the third too, serving out the match at love thanks to an attacking display that left Goffin helpless.

“(It was a) pretty good match up I suppose for me. I knew what I had to do,” Ebden said.

“It’s no secret I can play at top-10 level more consistently now. And yeah, I want that for myself, to do that for two weeks (at Wimbledon), but (also) for the whole year, for the rest of my career, basically. That’s what we’re all working hard to do, and enjoying doing. It’s more fun when you know what you have to do, and can do it. (laughter)

“Of course I believed I could win, expected to win, did win. I couldn’t ask for much more. It was pretty routine, went according to plan. It was pretty comfortable in the end. I kind of expected that in a way.”

French qualifier Stephane Robert awaits Ebden in the second round.

Tomic, still not 100 per cent after being ill during his final-round qualifying loss last week, advanced to the second round with a 6-4 6-2 7-6(2) triumph on Court 17.

It was an impressive return to the All England Club for Tomic, who reached the quarterfinals in 2011 as an 18-year-old qualifier – his best Wimbledon performance.

The Queenslander hurled down 12 aces and held serve throughout as he overpowered the world No.122.

Tomic was handed a lifeline into the main draw despite losing to Ruben Bemelmans in Roehampton last week where he said he woke up feeling ill on the morning of the match.

The former world No.17 didn’t waste his opportunity, closing out a comfortable win to set up a secord-round match against Japanese 24th seed Kei Nishikori.

Tomic said he was all set to get on a plane and head home just before learning of his late first-round inclusion and believes he can make an impression in his favourite event of the year.

“I always play well here, I just need to get into a rhythm,” Tomic said. “I was sick for five days and even today I didn’t feel my best, but I feel a lot better. It’s not easy to be sick, but I gave it another chance.”

Tomic’s victory was his ninth of the grass-court season after the 25-year-old made a run to the semi-finals in ‘s-Hertogenbosch before arriving at Wimbledon.

A junior singles finalist in 2016, De Minaur made the perfect start in his open-age debut at the All England club, seeing off a player who’d reached the semifinals at his last two events.

Cecchinato stunned the tennis world with his run to the final four at Roland Garros last month, and he continued to impress on grass by reaching the semis last week in Eastbourne.

He sealed victory with a scorching backhand winner up the line.

“It was a dream come true to be playing Wimbledon and it couldn’t have gone any better. Unbelievable feeling and I’ll cherish it for a long, long time,” said De Minaur, who’d won 11 of 13 grass-court matches – including the ATP Challenger in Nottingham -coming in to Wimbledon.

“So many nerves and mixed emotions going throughout the whole match … So many things going through your head there and you really just want to get it done. When I was able to finish it off, I was able to finally let go, of all that nervous energy, all the (feeling of) how tired I was. Everything was alright after that.”

De Minaur had his leg strapped in the third set, but says he’s feeling physically fine ahead of his second-round meeting with Pierre-Hugues Herbert, who upset Eastbourne champion Mischa Zverev in straight sets.

“I just felt an awkward movement and decided to do what I could to prevent anything from being any worse. But after that it was fine,” De Minaur said.

Making his way back from multiple surgeries in the past 18 months, James Duckworth – playing on a protected ranking – was dealt a tough first-round assignment against No.4 seed Alex Zverev.

After pushing the German hard in the first set on No.2 Court Duckworth couldn’t keep pace, falling to a 7-5 6-2 6-0 defeat.

“I never felt I had great rhythm throughout the match. I was probably lucky to get to 7-5 in that first set. I didn’t feel like I served great, I was pretty poor and he’s a good player,” Duckworth told AAP.

“It’s better being here than being back at home and rehabbing and it’s a great place to play. But it’s probably about six months until I feel more confident and hitting the ball.”

On an even bigger stage on No.1 Court, Bolt came up against No.1 Brit Kyle Edmund, the 21st seed, as well as a partisan British crowd.

After dropping the first two sets, Bolt managed to break Edmund in the third set and served for it at 5-4, but despite having a set point missed his chance when the Brit belted an inside out forehand winner.