Barty, Gavrilova, Stosur through at Wimbledon

Ash Barty scores her first main-draw victory at Wimbledon while Daria Gavrilova and Sam Stosur have set up an all-Aussie clash in round two. 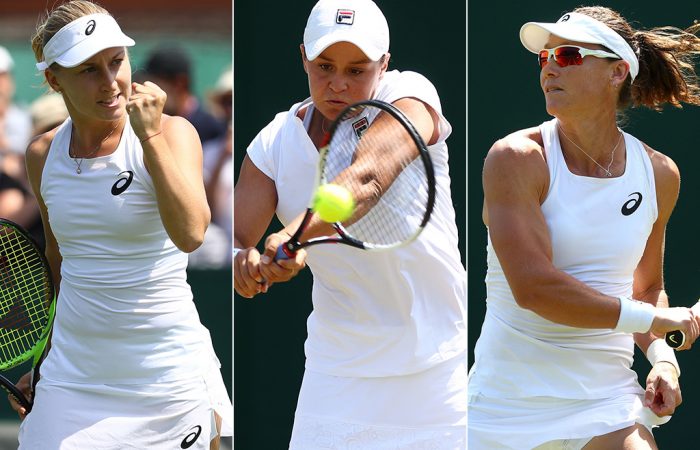 A magnificent day for Australia’s women on Tuesday saw Ash Barty, Daria Gavrilova and Sam Stosur all win through to the second round at Wimbledon in straight sets.

Gavrilova was the first through – and the first winner at The Championships on Day 2 – after overwhelming lucky loser Caroline Dolehide 6-2 6-3.

Shortly after that, Barty sealed a 7-5 6-3 win over Stefanie Voegele on Court 12 to record her first main-draw victory at the All England Club.

And then it was Stosur’s turn to shine, with the veteran closing out a 6-4 7-5 win over Peng Shuai with a forehand winner to set up a second-round meeting with Gavrilova.

“One of the first things I said to Josh (Eagle) was ‘did Dasha win?’,” Stosur laughed after improving her head-to-head record against Peng to 9-1. “For a couple of reasons; good for both of us, but also a little intrigue to know who I’m playing next.

“Probably fair to say that both of us wouldn’t pick grass as our favourite surfaces but with my newfound love for everything then that doesn’t really matter any more. I think it will be a slightly different match-up but yeah, I’ll enjoy today and worry about it tomorrow.

“Against Dash, no matter when you play you’ve gotta be up for every point. She fights incredibly well, moves very well, she’s tenacious, she’ll not give you much at certain times and then she can play aggressive but her defensive skills are also very good – some of the best in the world, I think.”

Stosur led by a set and a break before Peng broke back, but at 5-5 the Chinese veteran dished up two double faults, allowing Stosur to break for a 6-5 lead.

She had little trouble serving it out.

Gavrilova had few troubles of any kind. Playing lucky loser Caroline Dolehide, the Australian admitted to nerves but was far too consistent and solid for the young American, who sprayed 18 unforced errors in the 67-minute match.

“Nice to get a solid win like that without any drama this time,” Gavrilova said.

“I was pretty nervous before the tournament; like, last night I didn’t sleep that well, especially (given) I thought that I’d play (Zarina) Diyas because she left it pretty late to withdraw.

“But I checked who was the No.1 alternate anyway just in case, and we did have a Plan B.”

Gavrilova has lost three of her last four matches against Stosur, including most recently in straight sets on clay in Strasbourg in May.

“Playing Sam again this year, (it’s) crazy. But I actually think that playing someone you know makes it feel less nerve-wracking. Feeling like you’re at home, almost. It’s weird. It’s gonna be tough, but I’m excited.

“Every time we’ve played we’ve had tough matches. I can’t expect any less. At least I returned a few kickers today (laughter). Sam’s is better.”

Barty, playing on a packed show court, initially found the going tough against Voegele, whom she’d beaten in the first round in Nottingham three weeks ago en route to the title.

Yet from 5-3 down, Barty reeled off eight straight games to completely turn the match on its head.

She would go on to win in one hour and 17 minutes, helped by seven aces and 33 winners to Voegele’s 14.

“It’s certainly nice to give myself a chance in the second round here at Wimbledon – I love these courts so it’s nice to sort of get my teeth stuck into the tournament a little bit,” Barty said.

“Really tricky conditions (today). I think first rounds are always tough as well and Stefi came out with a bit of a different game plan to what she did a few weeks ago. I just needed to make a lot more balls, I was giving her way too many cheapies, and not giving myself a chance in games.

“So it took me a while to adjust and certainly wasn’t my best tennis, but I did enough to get through and that’s all we need. Certainly happy to come through reasonably unscathed.”