John Millman was the lone Australian winner on Monday at Wimbledon; his four-set win over Stefano Travaglia booked a showdown against 13th seed Milos Raonic in round two. 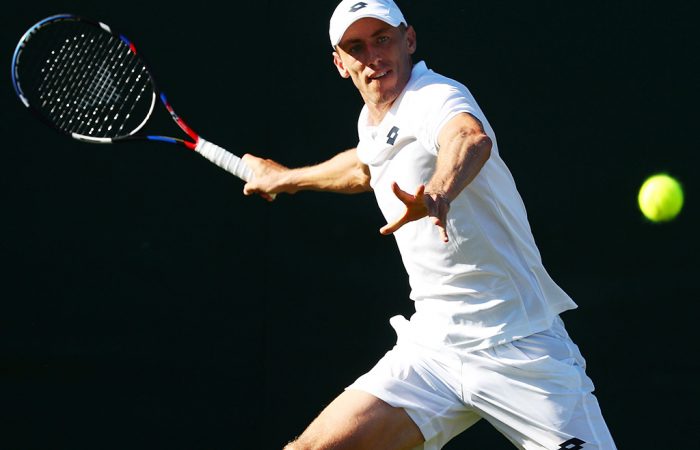 His win was a boost for the green-and-gold on a day when Australia’s four other competitors in action – Jordan Thompson, Jason Kubler, John-Patrick Smith and Ajla Tomljanovic – bowed out of the tournament.

Millman arrived at the All England Club after reaching his first ever ATP grass-court quarterfinal at Eastbourne. That came a week after he qualified for the main draw at Queen’s Club.

“Really important I managed to get away with a pretty tight third set and after that really carry on my momentum into the fourth,” Millman said of his win over Travaglia.

“Really delighted with it; the crowd were amazing, they really got behind me. I think a few people carried over from Eastbourne where I had some good support too, so it was really good to be out here and just to play at Wimbledon – it’s a special place. So I’m happy to extend my stay here.

“I’ve never played Milos before but in the past I’ve competed well against some big servers … It’s always tricky because I like to be engaged in a bit of a battle.

“It’s important for me to really look after my service games and just be aware with those one or two opportunities that I might get on Milos’s serve.”

Millman’s fellow Queenslander Jason Kubler put up a great fight before surrendering in four sets to Guido Pella on Court 11.

Kubler had won three matches to qualify for the tournament and gave the Argentine – a former world No.39 now ranked 82nd – plenty to think about on Court 11.

“I was pretty happy after the match, I wasn’t too disappointed, just because the match could have turned out (worse) … I’m just happy I dug deep,” he said.

“I’m not always gonna win matches that are like that but as long as I can put myself in a position where there’s a chance, then I can’t be disappointed.

“First Wimbledon – unreal. I’m pretty happy. Even though I lost, I don’t want this one loss to override what a great week-and-a-bit it’s been.”

Thompson lacked the weaponry to contend with the American, who had last year beaten Andy Murray to reach the Wimbledon semifinals and the year before defeated Novak Djokovic en route to the quarters.

The Aussie was down two-sets-to-love in 52 minutes and, although he settled somewhat in the third, Querrey’s 15 aces and 38 winners to Thompson’s 19 proved decisive.

“I am going to take a little bit of time off, get back into tennis in the following week, relax and get the body fully right,” Thompson said.

“Results speak for themselves and I haven’t done well this year. I think I have done well to stay where I am and be at the Grand Slams.

“You need to be able to do everything in tennis. Everyone is so good and they all have their weapons. For someone like me, who is a little bit smaller than most players now, I need to work on movement, speed, racquet-head speed, the whole lot.”

It was a similar story for Ajla Tomljanovic, who followed Thompson onto Court 3 and also faced an American seed – No.10 Madison Keys.

And like Querrey against Thompson, Keys’ power and pace of shot was the difference. On the lush, slick lawns that are a feature of the opening day’s play, Keys groundstrokes fizzed through the court, generating 19 winners to just seven unforced errors.

Later in the day, qualifier John-Patrick Smith came up against Italy’s Andreas Seppi and could not find a chink in the world No.43’s armour.

Seppi completed a 6-2 6-4 6-1 win to move through to a second-round meeting with No.8 seed Kevin Anderson.