Alex De Minaur's excellent grasscourt form has been rewarded with a Wimbledon singles wildcard. Lleyton Hewitt and Alex Bolt have been granted a doubles wildcard. 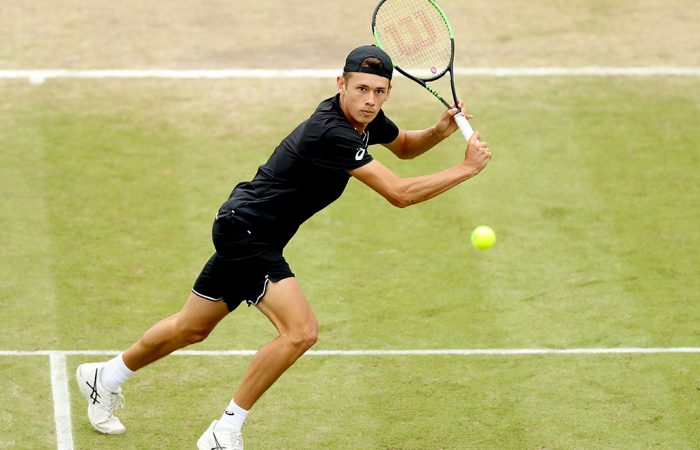 Alex De Minaur will make his first main-draw appearance at Wimbledon after receiving a singles wildcard on Wednesday.

The Australian teenager, who won last week’s grass-court Challenger title in Nottingham, was a wildcard recipient alongside Brits Liam Broady and Jay Clarke.

Two more Aussies, Lleyton Hewitt and Alex Bolt, will pair up and compete in the men’s doubles event, also thanks to a wildcard.

De Minaur has fond memories of Wimbledon; he reached the final of the boys’ singles event in 2016 before going down to Denis Shapovalov in three sets.

Last year, he reached the second round of the singles qualifying competition at Roehampton.

In 2018, De Minaur comes into The Championships as one of the tour’s in-form grass-courters, having won nine of his past 10 matches on the lawns.

Two weeks ago, he beat a succession of top-100 opponents en route to the final of the Surbiton Challenger before his title-winning run in Nottingham.

“The body was really feeling like (some time) off, so I will thoroughly enjoy that and have a couple of days of no tennis,” De Minaur told The Australian on Tuesday after his Nottingham success.

“Hopefully (I’ll) get some good news that I have got into Wimbledon, which would mean that I would play at Eastbourne.”

There are five remaining men’s singles wildcards still to be announced by the All England Club.