After titles for Ash Barty and Alex de Minaur, Australian players are looking for more grass-court wins in the build-up to Wimbledon. 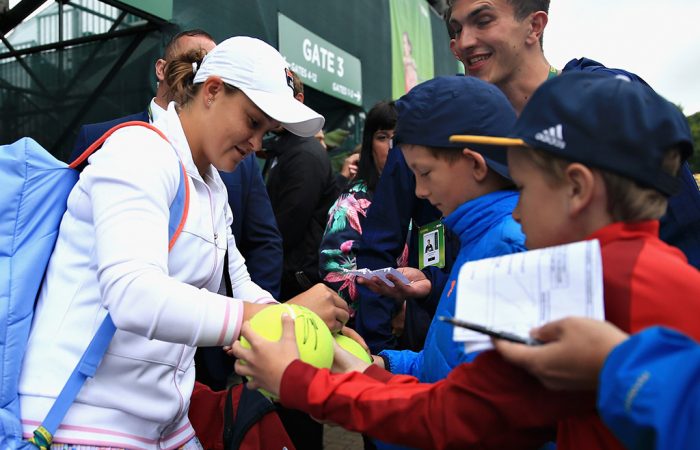 Number ones Ash Barty and Nick Kyrgios will lead the challenge as Australia’s players look for another successful week on Europe’s grass courts.

Barty captured the second WTA title of her career at the Nottingham Open on Sunday, while teenager Alex de Minaur won his first ATP Challenger title at the same venue.

Kyrgios lost a thrilling semifinal against Roger Federer in Stuttgart and will hope to carry that form with him to London.

He faces five-time champion Andy Murray at Queen’s Club on Tuesday in what will be the Briton’s first match in 11 months following a hip injury.

John Millman came through two rounds of qualifying to reach the main draw, where he will face former world No.1 Novak Djokovic.

Sure to be watching from courtside will be Davis Cup captain Lleyton Hewitt, a four-time champion at Queen’s who is teaming up with Kyrgios in the doubles this year.

Barty is also in doubles action this week at the Birmingham Classic, alongside Coco Vandeweghe, as well as trying to extend her singles winning streak on grass with a first-round draw against a qualifier on Tuesday.

Daria Gavrilova plays Slovakia’s Dominika Cibulkova in round one on Monday.

Jessica Moore, Monique Adamczak and Anastasia Rodionova are all competing in the doubles in Mallorca.

In Germany, Matt Ebden takes on Tunisia’s Malek Jaziri in the first round on Tuesday.

Away from the main Tours, a host of Australian players are heading to Yorkshire for the ITF and ATP Challenger event at Ikley, where Jordan Thomspon is the top seed in the men’s event.