Nick Kyrgios is into the Stuttgart quarterfinals in his first singles tournament since early April. 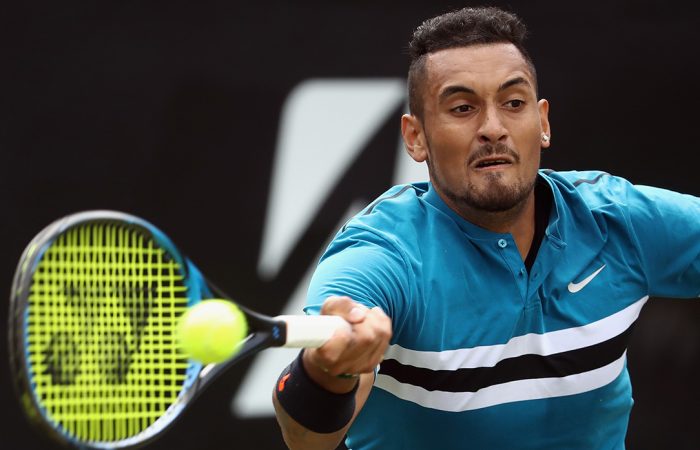 Back in singles action for the first time in two months, Nick Kyrgios made a winning start in Stuttgart.

The world No.24 recorded a 6-4 4-6 6-3 victory over German Maximilian Marterer to book a quarterfinal spot at the Mercedes Cup.

Kyrgios, who missed Roland Garros last month with an elbow injury, fired 20 aces in the 87-minute victory. It sets up a quarterfinal showdown with eighth seed Feliciano Lopez of Spain.

Can he keep up the pace against Feliciano Lopez? 🤔 pic.twitter.com/frUh0QgQJB

Great to be back out there again! Oh yeah, got to make up for lost tweeners LOL https://t.co/YOy8P1rvEQ

Alex Bolt’s winning run in s-Hertogenbosch is over. The 25-year-old South Australian who qualified for the Dutch event then scored his first ATP World Tour main draw win in the first round, lost to American wildcard Mackenzie McDonald in the second round. McDonald won 6-4 7-5.

Bernard Tomic plays his quarterfinal tonight, taking on Fernando Verdasco. Tomic has won his past five matches against the fourth-seeded Spaniard. Matthew Ebden is also into the final eight, where he’ll play Romanian Marius Copil.

Ajla Tomljanovic resumes her second-round clash with Belarusian Aryna Sabalenka locked at one set-all. The match was suspended last night after Tomljanovic won the first set 6-3 and lost the second in a tiebreak.